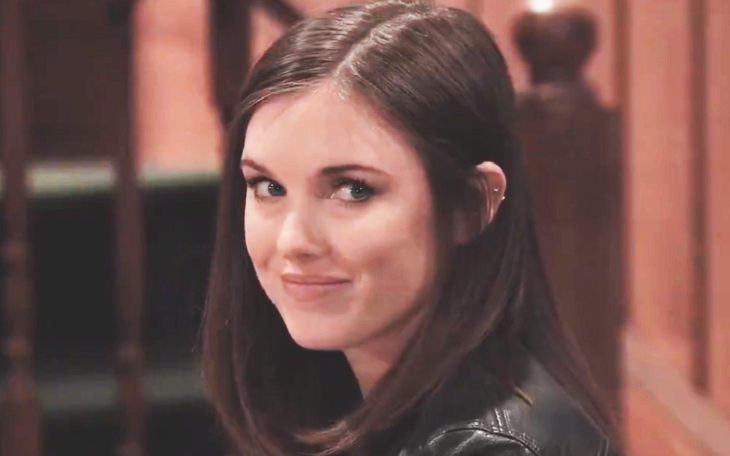 General Hospital spoilers tease that Willow Tait (Katelyn MacMullen) will make a shocking confession on Wednesday, June 19th. But who will get the secret information from Willow, and how will it happen, and where?

As General Hospital viewers know, Willow has some secrets that she will share with some people in her life; her good friend Michael Corinthos (Chad Duell) or her boyfriend Detective Harrison Chase (Josh Swickard). And perhaps other secrets that she won’t even share with them.

As of right now, she is trying to keep the live birth of her baby a secret from her mother, Harmony Miller (Inga Cadranel) and the baby’s father, Shiloh Archer (Coby Ryan McLaughlin), although her friends know.

What no one knows is that Willow and Shiloh’s original baby died, except Julian Jerome (William DeVry), Brad Cooper (Parry Shen) and Nelle Benson (Chloe Lanier). Of those three, only Brad and Nelle know about the switch, and that the Wiley Cooper-Jones (Eric and Theodore) that Brad and his husband Lucas Jones (Ryan Carnes) have is really Jonah Corinthos. That is a secret to Willow, Chase, and Michael as well.

However, Willow will be required to go to family court. And even though this is much different from criminal court, where providing false testimony can put a person in danger of perjuring themselves, Willow may feel compelled to tell the truth about her child being born alive. If she does tell the truth, it will be in front of Shiloh, who will be in the family court as well.

However, she cannot be compelled to tell where the baby is, although she may have to say that he was put up for adoption. It’s even possible that the adoption could be invalidated – probably in a separate hearing – because the birth father was never notified.

A paternity test will likely be required first. On the other hand, “Dawnies” are everywhere; possibly even working in Diane Miller’s (Carolyn Hennesy) law office; and General Hospital viewers know what that means!

General Hospital Spoilers – Will It Involve Her Secret Pledge?

But can this really be considered a “shocking secret” as the spoiler is worded? The fact that she would admit her baby boy was born alive might be a shock, but something else could qualify as Willow’s shocking secret – her Dawn of Day pledge!

It’s surprising that Shiloh hasn’t tried holding her pledge secret against her yet, because even though she has the paperwork, he has the memory of what the pledge secret was, even though he may not be able to prove what he says. It’s hard to imagine sweet Willow having any ugly secrets that could harm her or her family, but maybe it’s just a secret that isn’t necessarily ugly, but could be used against her by Shiloh nonetheless in some way.

Maybe Willow knows she was a black market adoption baby and the pledge contains some details about that – and possibly a half-heart necklace? Stay tuned to General Hospital and keep checking General Hospital spoilers frequently for all the latest news, updates and spoilers!