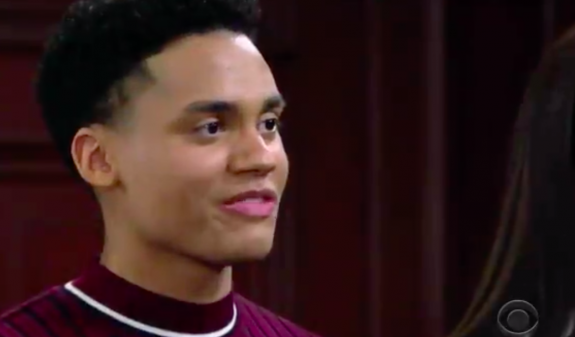 The Bold and the Beautiful spoilers tease that Xander Avant (Adain Bradley) will soon be at his wit’s end. When Xander first arrived on the B&B scene, he was an easygoing, carefree guy who just wanted a shot working at Forrester Creations. But now, he’s found himself embroiled in a scandal, and he’s being forced to keep a terrible secret against his will.

B&B Spoilers: Xander Avant Will Be At His Wit’s End

As B&B viewers know, Thomas Forrester (Matthew Atkinson) has recently found out that Hope Logan (Annika Noelle) and Liam Spencer’s (Scott Clifton) daughter Beth Spencer is actually alive and living life as Phoebe Forrester (River Davidson and Madeline Valdez). And while Thomas almost spilled the secret to Steffy Forrester (Jacqueline MacInnes Wood), he changed his mind at the last minute and decided that the secret was better kept.

And this has put Thomas at serious odds with Xander. As B&B viewers know, Xander has a strong moral compass, and he knows that the only right thing to do in this situation is to tell Hope and Liam that their little girl is alive. He knows that the longer Steffy continues to bond with “Phoebe,” the harder it’s going to be for everyone when the truth comes out.

Bold And The Beautiful Spoilers: Xander Avant Will Tell The Truth

Xander knows that there’s only one right answer here…to tell the truth. And he’s seriously peeved that Thomas is trying to strong-arm himself, Zoe Buckingham (Kiara Barnes), and Florence “Flo” Fulton (Katrina Bowden) into keeping their mouths shut. He just doesn’t think it’s right, but Thomas has really given him no choice but to keep the secret.

As B&B viewers know, Thomas threatened to make sure that Zoe spends hard time in prison if Xander spills the truth. Xander doesn’t particularly like being pushed around, and B&B spoilers say that he’ll seriously push back against Thomas. It seems that if Thomas thought that Xander was going to just succumb to his threat, he’s going to have another thing coming.

The Bold and the Beautiful spoilers say that everything is going really start to get to Xander soon, and he’ll totally lose his cool when Thomas starts making threats again. We might see a big blow-up between Xander and Thomas, as Xander decides that he doesn’t want to be pushed around. Go Xander!

B&B Spoilers: We Will See A Different Side Of Xander Avant

It will certainly be a different side of Xander than we’re used to seeing. But this is an extraordinary situation that Xander’s found himself involved in. Plus, Xander really cares about Hope and Liam. He considers them to be family, and he doesn’t feel that it’s right to keep their daughter from them.

At any rate, B&B viewers can expect to see a major blow-up between the men. The only question now is whether Thomas will be successful in keeping Xander under wraps. Just how determined will Xander be to tell Hope and Liam the truth?