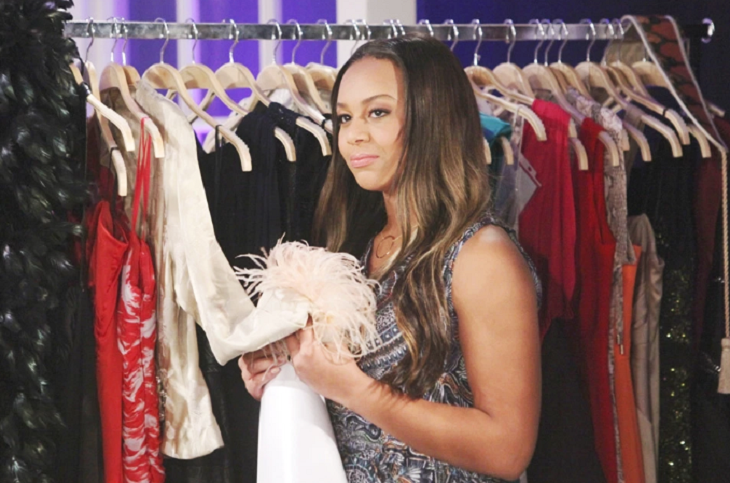 “The Bold and the Beautiful” (BB) recap for Wednesday, June 19, 2019 reveals that over at Forrester Creations, Hope Logan Spencer (Annika Noelle) senses something is going on inside of Thomas Forrester (Matthew Atkinson) and urges him to talk to her. Thomas remarks on her being so caring and says it’s no wonder he and Douglas love her.

Xander Avant (Adian Bradley) and Zoe Buckingham (Kiara Barnes) enter. Xander asks if Hope’s okay and if she’s seen Phoebe lately. Thomas feels that’s none of his business and Zoe decides they should leave. They admire Hope’s dress, and when she goes to change, Thomas promises the duo his dream for the future will come true and if Xander keeps fighting him on this he will regret it.

Xander asks him to stop threatening them. Thomas isn’t threatening; he’s telling them how it’s going to be. Xander’s disgusted at Thomas not being honest with Hope and Liam Spencer (Scott Clifton). Zoe interjects that Thomas wants what’s best for everyone. Later, Hope thanks Thomas for the dress. Thomas cares about her and wants to be a family and when he wants something he goes after it, and he wants her. Hope’s not ready to make promises. Thomas insists she will be; she needs to let go.

At the cliff house, B&B’s Steffy Forrester Spencer (Jacqueline Wood) realizes it’s an emotional moment for Flo Fulton (Katrina Bowden), seeing the little girl she gave up for adoption. She never wants to keep Phoebe away from her and thanks her for bringing her into their lives. Wyatt Spencer (Darin Brooks) wants to hold the baby, so Liam Spencer hands her over.

Steffy marvels at Phoebe’s birth mother being a Logan – she can see the resemblance. Flo sighs, “Phoebe is definitely a Logan.” The visit wraps up with Liam and Wyatt joking, and Liam assuring Flo he’ll raise Phoebe like she’s his own daughter.

After, Steffy and Liam reflect that Flo will always be a part of Phoebe’s life. They banter about the wifi signal; Steffy enjoys having him there. She wonders if he’s thinking about Hope Logan Spencer. Liam loves being there but is still concerned about Thomas Forrester – he doesn’t trust him and wishes Hope wouldn’t either.

Bold And The Beautiful Spoilers – Hope Spencer’s Baby Is Alive

In B&B’s Flo Fulton’s room at the Forrester mansion, she doesn’t want to talk about Phoebe with Wyatt Spencer – there are other things they could be doing. They kiss as she says her life is amazing right now because he came back into it. After sex, Flo worries about losing this life. Wyatt says it’s not going to happen.

In the Forrester Creations studio, B&B’s Emma Barber (Nia Sioux) flashes through her memories there and continues cataloging dresses. She overhears Zoe Buckingham and Xander Avant arrive and frowns as Zoe tells Xander they have to let this go and forget the truth about Beth. Xander alludes to what Zoe’s father did and says it was horrible.

If Liam Spencer and Hope Logan Spencer knew the truth, they’d have their family. They argue about how to come clean. Xander thinks Reese Buckingham (Wayne Brady) should tell them what he did with their precious baby girl. Emma shows herself and demands to know if it’s true. Xander confirms, “Hope’s baby is alive.” And that’s a wrap.