Days Of Our Lives Spoilers & Recap Wednesday, June 19: Will Has An Out-Of-Body Experience – Roman Learns Of Caroline’s Death 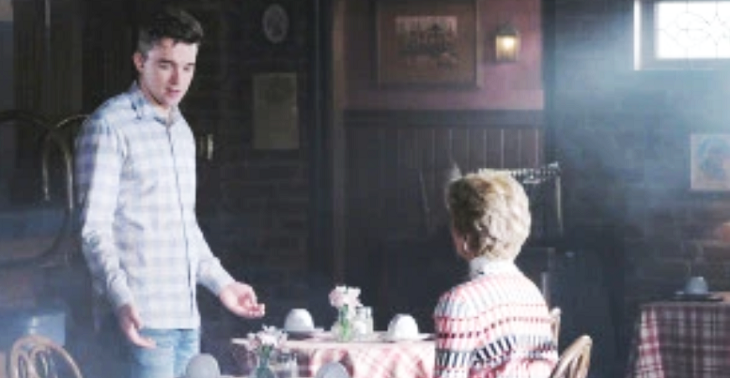 Days of Our Lives (DOOL) recap Wednesday, June 19, 2019 reveals Tripp Dalton (Lucas Adams) asks Ciara Brady (Victoria Konefal) how they are supposed to get a confession out of Claire Brady (Olivia Rose Keegan).Claire hears Tripp agree to help Ciara and asks with what. Ciara lies and says she wants Tripp to go to the gatehouse with her to get her stuff. Tripp pulls away from Claire and claims to feel guilty.

Claire lies and tells Tripp she understands. Tripp tells Claire if she had been honest, he would have understood. Claire tells Tripp she is about to be very honest with him; she needs to tell him something.  Claire tells Tripp she didn’t mean to hurt him. Claire says she told Eve Deveraux (Kassie DePaiva) that Tripp framed Ben Weston (Robert Scott Wilson). Tripp says he is in no position to judge and deserves what happens to him.

Claire starts talking about Ben being the one who started the fire, and Ciara loses it, yelling at her to stop. Tripp defuses the situation by telling Claire it is too soon to talk about Ben. She tells Ciara it is better that she knows the truth, Ciara agrees. Claire suggests that Ciara talks to her grandmother to help get over Ben. Claire offers to go with Tripp and Ciara before hugging Ciara. Tripp tells Ciara she can’t let Claire know she is onto her. Ciara has an idea of how to get the proof they need.

Days Of Our Lives Spoilers – Everyone Praying For Will Horton

Days of Our Lives Eric Brady (Greg Vaughan) is in the chapel praying for Will Horton (Chandler Massey). Sarah Horton (Linsey Godfrey) walks into the chapel and tells Eric she has good news. Sarah tells Eric they made the antidote and asks if she can wait with him. Eric thanks Sarah for making the cure and hugs her. He tells Sarah she and Rex belong together, but it’s over with him and Nicole Walker (Arianne Zucker). Eric says he makes things worse for Nicole.

Sarah tells Eric that Nicole didn’t deserve him. Eric tells Sarah that Marlena Evans (Deidre Hall) suggested it wasn’t too late for the two of them. Eric tells Sarah that Rex loves her and there is no future for them. Sami Brady (Alison Sweeney) and Lucas Horton (Bryan Dattilo) arrive and Sami hugs Eric. Sarah goes to check on Will as Sami tells Eric that Rex isn’t sure that the cure will work. Eric talks Sami into praying for Will. Kate and Roman talk about how afraid she was that Will would die. Roman says Will and Sonny have a long life ahead of them. Roman calls Kimberly Donovan (Patsy Pease) who informs him that Caroline Brady (Peggy McCay) is dead.

Days of Our Lives Marlena, Sami, Kate Roberts (Lauren Koslow), Lucas, and Roman Brady (Josh Taylor) are joined by Rex Brady (Kyle Lowder). Everyone wonders if Rex has found the antidote for Will. Rex tells everyone they have a close to an antidote as he can come and goes to give it to Will. Sami is determined to go into Will’s room, Lucas offers to go to the chapel with her. Kate is surprised that Sami took Marlena’s advice. Marlena is glad that Lucas is there. Kate and Marlena bond over their love for their children.

Days Of Our Lives Spoilers – Will Horton’s Heart Stops Beating

Days of Our Lives Will’s alarms start going off, and Sonny Kiriakis (Freddie Smith) tells Kayla Brady (Mary Beth Evans) that Will is dying. Will’s heart stops, and he has an out-of-body experience. Kayla comes in and begins to shock Will’s heart, trying to bring him back. Will heart finally starts beating again, and Rex wants to give him the antidote, he doesn’t think it can wait. Rex gives Will the medication and hopes it will work fast. Rex goes to get the family as Sonny waits for a response from Will. Rex tells everyone that so far, Will is not responding. The family gathers in Will’s room and begs him to come back. Eric and Sarah congratulate each other on saving Will, and they kiss.

Days of Our Lives Will goes to the Brady Pub in this state and asks if anyone is there. Will finds a torn picture of Sonny and himself on the bar. Will hears his grandmother Caroline talking at his first wedding. Kayla shocks Will’s heart, and it starts beating again. Will is visited by Caroline while at the Pub. She reaches out and takes Will’s hand. Will tells Caroline he understands and asks if she’s sure. Will hugs Caroline and his vitals start to pick up. He wakes up and is surprised to find everyone in his room.

Will realizes that he died and saw a bright light and then he was at the Pub. He talks about the torn picture of Sonny and Will. Will tells Sonny he looked again and the picture was back together, proving they were meant to be together. Will tells them Caroline was there and talked to him. He says Caroline sent him back to all of them. Will tells them he had Caroline’s hands in his and she sent him back. Sami says Grandma is still alive. Kayla joins Roman in the hallway, and Roman tells Kayla that Caroline is dead. Roman and Kayla hug each other and cry together.