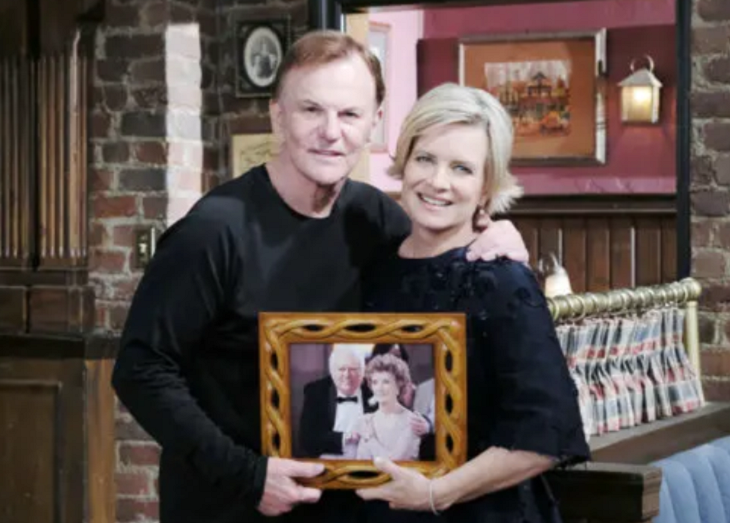 Days of Our Lives spoilers tease that Roman Brady (Josh Taylor) will get some devastating news to share with his younger sister Kayla Brady Johnson (Mary Beth Evans). He will receive news that their mother, Brady family matriarch Caroline Brady (Peggy McKay) has passed away.

As Days of Our Lives viewers should recall, Peggy passed away in real life in October 2018, and Patsy Pease, who plays Kimberly Brady, will not be able to make an appearance because she’s recovering from surgery.

Days of Our Lives showrunners have not released what Caroline’s cause of death will be, although obviously it is sudden and unexpected for her children to cope with.

Days Of Our Lives Spoilers – Had A History Of Heart Disease

Perhaps Roman will be given that information in the scene when he is notified. Caroline had, however been suffering Alzheimers’ type memory lapses in 2012 which was cured by a protocol supplied by Andre DiMera (Thaao Penghlis).

Days Of Our Lives Spoilers: Shawn And Belle Arrive In Salem, Will There Be Drama?

She also had a previous history of heart disease, having suffered a heart attack in 1994. Caroline was last seen in Salem in 2016 at Will Horton (Chandler Massey) and Sonny Kiriakis’ (Freddie Smith) first wedding, where she stood up for them. It has been assumed she has been living in California with Kimberly.

Days Of Our Lives Spoilers – Ghostly Peek Through The Window

Kimberly lives in Los Angeles, California as Max also does. Frankie lives in Washington, DC; Roman and Kayla of course live in Salem and Bo Brady (Peter Reckell), Caroline’s son with Victor Kiriakis (John Aniston), is deceased, having passed away from cancer in 2016.

This one hurts. #DAYS pic.twitter.com/dYerZGrjoG

Thursday’s Days of Our Lives episode will be a Caroline Brady-centric episode with several of the Brady grandchildren we haven’t seen in a while present – Shawn Douglas Brady (Brandon Beemer), Carrie Brady (Christie Clark), and Sami Brady DiMera (Alison Sweeney) among them.

Even Caroline herself will give a ghostly peek through the window of the Brady Pub! Days of Our Lives spoilers say this should be a fantastic sendoff for both Peggy McCay and Caroline Brady. We’ll give you updates as other details and rumors emerge. Stay tuned to DOOL and don’t forget to check Soap Opera Spy often for the latest “Days of Our Lives” spoilers, rumors, updates and news.