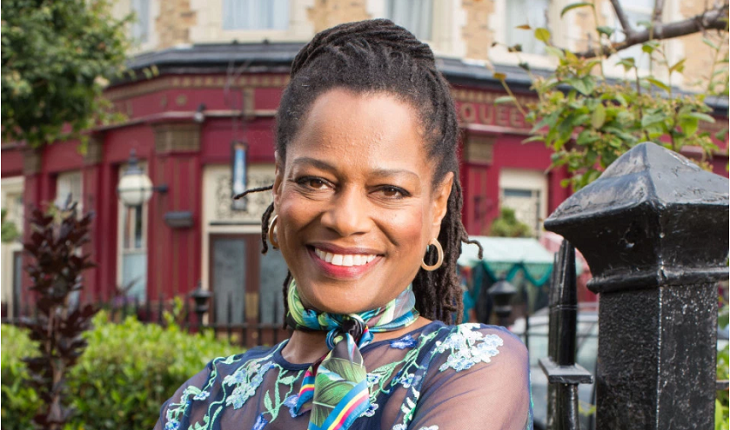 A familiar face is joining “EastEnders” this summer, and she’s going to play the role of Patrick Trueman’s (Rudolph Walker) new love interest.

Suzette Llewellyn, whom viewers recall for her roles in various TV series like “Coronation Street,” “Hollyoaks,” “Holby City” and “Doctors”, is joining the sudser as Sheree. Her presence in town will shock Kim (Tameka Empson) and Denise Fox (Diane Parish) because she’s with Patrick.

Llewellyn’s alter ego is described as “a ball of positivity with a serious zest for life,” who will not hesitate to confront anyone who does her wrong. In an interview, Llewellyn said: “I am delighted to be joining the cast of EastEnders and I’m very excited to see what’s in store for Sheree.”

EastEnders Spoilers – How Will Sheree Settle Into Walford?

She added that her character is “bold, bright, and a lot of fun” and expressed excitement at how Sheree would settle into Walford.

Despite her feisty and sunny exterior, the locals will have their doubts about Sheree. That’s all that can be said about her character for now. “EastEnders” showrunners are keeping everything about Sheree tightly under wraps and viewers just have to wait and see until she appears in Albert Square.

Viewers know Llewellyn for her role as Nanette Duval in “Holby City” and as Estelle Vere in “Doctors.” Apart from that, she also appeared in “Coronation Street” as consultant neurosurgeon Nina Morrison in 2013,2015, and 2017.

EastEnders Spoilers – Not Her First Episode On The Sudser

She is also known as the kidnapper Margaret Smith in “Hollyoaks,” and played a role in “Thirteen.” She even guest starred in “EastEnders” and played the role of a court clerk in several episodes between 2015 and 2016.

Jon Sen, Executive Producer of “EastEnders” said, “I’m thrilled to announce that Suzette’s joining the show as Sheree – a force of nature with a big heart who’s never far away from trouble. Fans are in for a treat this summer!”

Suzette Llewellyn joins the cast of #EastEnders, taking on the role of Sheree. Her arrival this summer promises to bring love, laughter and life to The Square. She arrives in Walford on the arm of Patrick, how will Kim and Denise react to the new woman in Patrick’s life? pic.twitter.com/iXBxiFsMfj

Llewellyn has starting filming her scenes and her first appearance in Albert Square will air over the summer. How will the Walford residents respond to Sheree’s arrival and will Denise and Kim accept that she’s now part of Patrick’s life?