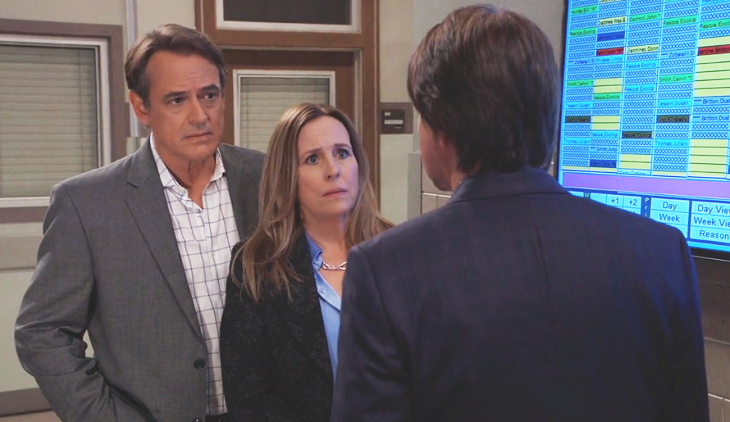 Laura doesn’t care if this cost her her job. Kevin doesn’t want Laura hurt by his actions. Finn joins Laura and Kevin in the hallway. Laura asks if this is about Ryan Chamberlain (Jon Lindstrom), Finn says yes. Finn gives them an update on Ryan who will be moved into a cell by the end of the week. Finn wanted to talk to Kevin about his suspension. Finn tells Kevin he has his job back and gives him the office keys. Finn is there if Kevin ever needs to talk. Finn congratulates Kevin again and excuses himself to see his patients.

Kevin tells Laura he can’t help but imagine her defending him to the board. Kevin tells Laura that her still loving him means everything to her. Laura believes in Kevin, too, and they kiss. Laura wants to go home and celebrate. Kevin said at least he didn’t sign that new lease. Laura wants to put this behind her and return to normal life. Laura’s assistant calls her and interrupts them. Laura has a budget issue to deal with and has to put off their plans. Kevin and Laura make plans to meet at home later.

General Hospital’s Michael Corinthos (Chad Duell) brings food from Kelly’s for Sonny Corinthos (Maurice Benard) and Carly Corinthos (Laura Wright). Carly hopes Michael has brought her a burger, but he says no, she has to take care of his little brother or sister. Sonny and Carly look at each other in concern for the baby. Michael has BLTs for everyone else, including Jason Morgan (Steve Burton) who just drops by with news for Sonny. Jason wants to talk in the living room. Carly and Michael want to be included in the conversation.

Jason has intel on Shiloh's legal predicament, West Coast. But is it enough to bring down DOD once and for all?
A dramatic, new #GH starts RIGHT NOW on ABC! @1SteveBurton pic.twitter.com/ALhEGw0bdB

Jason tells Sonny that Margaux Dawson (Elizabeth Hendrickson) give him a lead on how to take Shiloh Archer (Coby Ryan McLaughlin) down. Sonny asks if this is about the drug overdose. Jason points out that the dead man’s name was Douglas Miller, and he could be connected to Harmony Miller (Inga Cadranel). Michael realizes this is Willow’s father and goes to confront her.

Michael asks Jason to give her until morning. Carly is furious that Sonny didn’t take her to the police station with her to pick up Josslyn Jacks (Eden McCoy). Jason wants Carly to be proud that Josslynis handling this. Carly is sure Jasper Jacks (Ingo Rademacher) will be mad. Jason tells Carly to think this through, Jax and Sonny with Josslyn in the middle. Carly tries to steal Jason’s food. Carly wants to know why going to Beecher’s Corner is a good idea.

General Hospital’s Lulu Falconeri (Emme Rylan) calls the cop to go back to her house because her dad never showed up. Lulu head to the house, as well as Josslyn, finds Dev (Ashton Arbab) in the living room. Josslyn calls the cops and is giving her statement when Lulu arrives. Josslyn updates Lulu on what happened and assures Lulu she isn’t hurt. Lulu asks Josslyn what the hell she was thinking walking into that house. Lulu tells Josslyn that she could have been killed. Lulu says she shouldn’t be yelling. Josslyn likes that Lulu isn’t walking on eggshells.

General Hospital’s Harrison Chase (Josh Swickard) gives Willow Tait (Katelyn MacMullen) a key to his apartment. Willow has to leave to meet with Diane Miller (Carolyn Hennesy) about her case. Chase reminds Willow that Shiloh has an army including mobsters against him and should leave town. Willow excuses herself for her meeting. Diane tells Willow that Shiloh’s attorney is ruthless. She tells Willow they knew this was tricky.

Diane plans to focus on the sex ring and tells Willow to leave it to her. Willow gets a text from Michael; they need to talk. Michael arrives, and Willow tells him Shiloh’s attorney is a shark. Willow says this is a nightmare she can’t wake up from; she doesn’t want to hear anything about DOD. Michael tells Willow he needs to talk about a death in Beecher’s Corner. He asks Willow if the man who died was her father. Willow says she can’t talk about this, and Willow can’t talk about it because she killed her father.

General Hospital’s Dev is caught and taken to the police station. Chase calls Lulu and says he heard about the break-in and thinks they found the guy. Dev tells them he’s not a thief, he’s a friend of Sonny. Dev tells Lulu he wasn’t trying to steal from the house, he caught someone trying to rob her house and stopped them. Chase has Dev moved to another room.

Josslyn is taken by Dev and can’t help but stare at him. Chase calls Lulu aside and wants an explanation. Josslyn calls Sonny about Dev. Sonny arrives, and Josslyn hugs him. She shows Sonny who she found in Lulu’s house. Sonny recognizes Dev from Turkey. Sonny asks Chase for time to clear this up. Sonny goes to speak to him and is shocked that Dev is there.