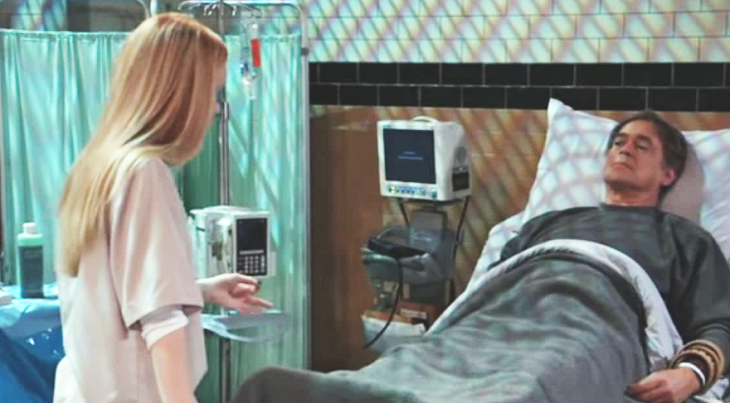 General Hospital spoilers tease that Nelle Benson (Chloe Lanier) and Ryan Chamberlain (Jon Lindstrom) certainly will be very important to each other as Ryan told Nelle. As a matter of fact, they are a match made in hell!

Ryan and Nelle both want freedom, and they are both sociopaths and narcissistic killers. In addition – Nelle is an excellent con woman. Ryan can be a con man too, but usually he just impersonates his brother.

He’ll have to find a different way to con now. He can still be quite charming to women, as General Hospital viewers saw him laying on the charm to Nelle when she came into the infirmary. Nelle, on the other hand uses seduction when it comes to conning men.

General Hospital Spoilers – Will The Pair Escape Together?

Ryan will need to heal up a little more from his kidney extraction wound before he tries anything like an escape. But with Nelle as his partner, they could escape together.

Nelle needs to make sure that neither Shiloh Archer (Coby Ryan McLaughlin) nor Michael Corinthos (Chad Duell) gets her son, Jonah Corinthos aka Wiley Cooper-Jones (Eric and Theodore). And now the woman who thinks she’s his grandmother happens to be Nelle’s cellmate, Harmony Miller (Inga Cadranel).

Nelle might just leave her be since she’s no danger to Jonah as long as she’s in Pentonville, but you can bet Harmony will talk about Shiloh, Dawn of Day and her grandson to Nelle, and she’ll figure out that Harmony is talking about the original Wiley who died the day he was born. Nelle already knows the birth father and the birth mother are trying to get the child back, and thanks to Harmony, she will know who they are; Brad Cooper (Parry Shen) didn’t tell her any names.

Nelle did mention parole to Brad, but as General Hospital viewers know, she’s a lying liar who lies, so parole to her might mean escape. If she and Ryan escape together, probably their first target together would be Carly Corinthos (Laura Wright) who also happens to be Wiley’s adoptive aunt. Then Ryan will want to get his revenge on all who conspired to get his kidney.

First of all his twin Dr. Kevin Collins (Jon Lindstrom), then Dr. Hamilton Finn (Michael Easton), and both he and Nelle will want to make sure that his brother, Detective Harrison Chase (Josh Swickard) isn’t a problem. Nelle might still want to eliminate Michael Corinthos (Chad Duell) and possibly Willow Tait (Katelyn MacMullen) to make sure she’s not a problem with Wiley/Jonah. She and Ryan together might end Shiloh, after Nelle cons him out of all the Dawn of Day money from the offshore accounts, so they can finance their fugitive run.

Once Nelle and Ryan have completed their revenge, they’ll kidnap Wiley/Jonah and go on the run! Ryan won’t mind, he’s a pediatrician and he loves kids. There are plenty others in Port Charles that have targets on their backs between Ryan and Nelle, the match made in hell! Stay tuned to General Hospital and keep checking General Hospital spoilers frequently for all the latest news, updates and developments!