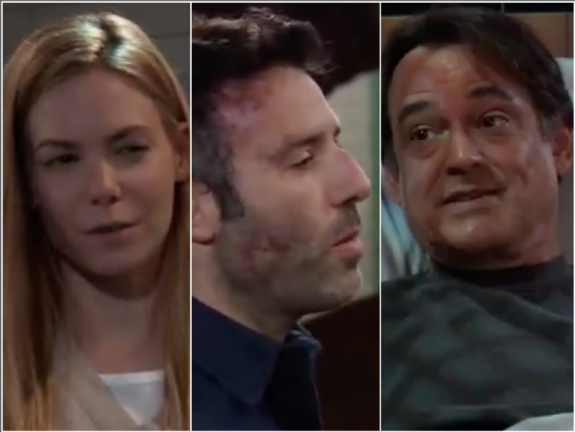 General Hospital (GH) spoilers tease that Shiloh Archer (Coby Ryan McLaughlin), Ryan Chamberlain (Jon Lindstrom), and Nelle Bensen’s (Chloe Lanier) worlds will collide and the three of them will take Port Charles by storm. During the week of June 17, the trio will form a connection and secrets will be exposed. It’s pretty clear that Shiloh’s investigation into where his son is will lead him straight to Nelle. Here’s what you need to know about what’s ahead on GH.

General Hospital Spoilers: World Are Going To Collide With All Of The Arrivals In Port Charles

One thing is sure, when someone is sent to Pentonville, they will probably run into a familiar face. It should come at no surprise that Nelle and Ryan ran into each other. GH spoilers shared that the duo began to compare notes. As it turns out, they had a lot in common – both duped out of a kidney and were tossed away by people they thought they could trust.

Chloe Lanier, the actress who plays Nelle, said, “When I get a new script, I almost always laugh. It’s almost hilarious and horribly cruel.” Lanier added that she cannot help but wonder what kind of trouble that the pair will get into together.

If anyone thinks that the threat that the Shiloh treat is gone, they would be sorely mistaken. General Hospital spoilers pointed out, Shiloh got Harmony Miller (Inga Cadranel)to take the wrap for his misdeeds. Now, the cult leader is free to stir up new trouble.

The one detail that not even Willow knows, is their child died and Nelle switch the babies. So, the child she thinks is her baby, he is Michael Corinthos’ (Chad Duell) son. It ‘s a scoop that will send everyone reeling – well everyone but Nelle and Brad Cooper (Parry Shen).

Even though Willow wants to protect Wiley from his perceived biological father, it will prove to be very difficult because Shiloh is determined t find his kid. And, the fans keep wondering what is driving his determination to find his son. And, when ABC Soaps In Depth asked Coby Ryan McLaughlin, Shiloh’s portrayer, why he is doing this, he wants the audience to draw their own conclusions as there are many ways it could be interpreted.

But what makes this story so compelling is that no one really knows the whole story. And, the story has so many layers. Yes, it is about a baby swap, but Nelle’s reason to switch the babies was not mean. She thought she was protecting her child.

And, then there’s the issue on Sam McCall) and Shiloh. The cult leader thinks that Sam is responsible for blowing up his life and he wants her to pay. Then, under all that, he is attracted to her and he thinks she deserves someone better than Jason Morgan (Steve Burton)—someone like him!

McLaughlin jokes, “It’s complicated! He wants to destroy Sam because she destroyed him. But he also wants to get closer to her and protect her, too. It’s a disaster.”