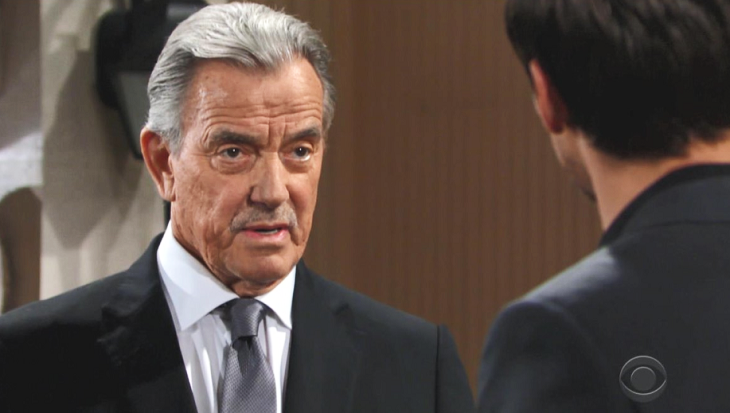 The Young and the Restless (Y&R) spoilers tease that Eric Braeden, the actor who plays Victor Newman, had a meltdown on Twitter over a fan who questioned his support of Mark Grossman (Adam Newman). The tweet is now unavailable as the social media user deleted it after many came to Braeden’s defense.

It all started when Braeden praised Grossman’s acting ability and he told his followers that the show is not making it easy for the young actor. They are giving him lots of emotional material, pages and pages per day. However, Grossman is doing wonderful, memorizing all his lines, and never misses a beat.

That’s a Michael Muhney, who formerly played Adam Newman, fan lost her marbles and unleashed at the person they think had something to do with their favorite actor’s exit. And, Braeden didn’t hold back in his reply either.

Young And The Restless News – Braeden Jealous Of Muhney?

Muhney’s fan pointed out that Braeden never gave Muhney any praise, suggesting he was jealous of his talent. They also implied that Braeden was the reason he was fired, not the bogus story of him allegedly groping a cast member.

Keep your bs to yourself , you got it?? I welcomed MICHAEL MUHNEY AS I HAVE EVERY ACTOR WITH TALENT! Always told him he was very good in scenes! So don’t give me that bullshit!!! The rest you have to ask others about!! How the hell would YOU know anyway??

Braeden wasn’t having it. And, Y&R fans are loving his response to them because it sounds just like Victor Newman.

“Keep your bs to yourself, you got it?? I welcomed MICHAEL MUHNEY AS I HAVE EVERY ACTOR WITH TALENT! Always told him he was very good in scenes! So, don’t give me that bullshit!!! The rest you have to ask others about!! How the hell would YOU know anyway??” Braeden wrote on Twitter.

Young And The Restless News – Not Braeden’s First Rodeo

At first, the person defended themselves, but after Braeden received so much support, they deleted their tweet. Braeden, however, did not delete his. He left it there for all the Muhney fans to come and see it so they might think twice about harassing him in this way.

This isn’t the first time Braeden has dealt with this type of drama on social media. And, to be honest, it probably isn’t his last. Young and the Restless fans are loving how he handled and settled this argument and forced the social media user into a corner.

Hollywood Hiccups is a leading source for everything linked to The Young and the Restless. Check back regularly for Y&R spoilers and news! As always, more detailed Spoilers and Breaking news will appear here on Hollywood Hiccups.