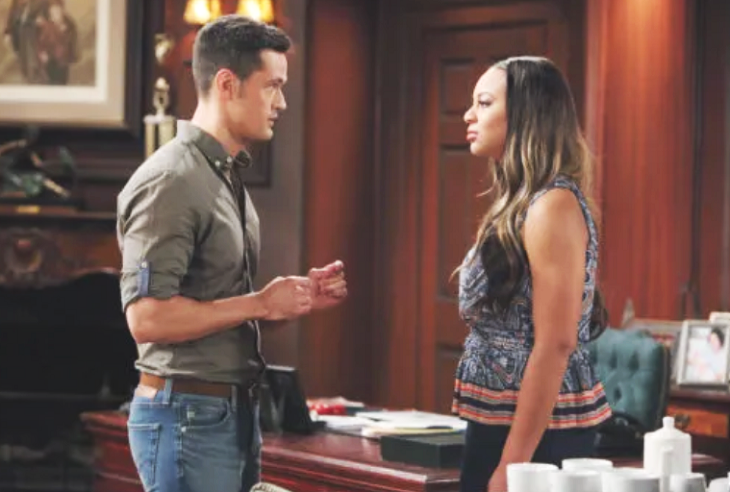 The Bold and the Beautiful spoilers for Friday, June 21, tease that Emma Barber (Nia Sioux) is going to feel the heat. She was just threatened big time by Thomas Forrester (Matthew Atkinson).

As B&B viewers know, Emma just found out that Beth Spencer is alive and living as Phoebe Forrester (River Davidson and Madeline Valdez). She’s morally outraged and determined to find Hope Logan (Annika Noelle) and tell her the truth.

But as B&B viewers know, Thomas has entirely different plans for Hope. He wants Hope to go on believing that her daughter is dead so that he can have her all to himself. He wants Hope to eventually marry him and be a mother to Douglas Forrester (Henry Joseph Samiri), and if Emma blabs the secret then that will never happen.

Bold And The Beautiful Spoilers – Someone’s Going To Die

What happens next remains to be seen, but it should be an explosive episode on Friday. The Bold and the Beautiful spoilers say that someone is going to die, and Emma is certainly among the contenders for who it will be.

And since Thomas just grabbed and threatened her, there’s a good chance it will be her who dies. We’ll have to wait and see exactly what happens here.

Meanwhile, on Friday’s new episode of B&B, Zoe Buckingham (Kiara Barnes) and Xander Avant (Adain Bradley) will argue again. They know that Emma is determined to tell Hope the truth about Beth, and all they can do is sit and wait for it to happen. Zoe will fret about her father going to prison, while Xander argues that it’s for the best that the truth comes out.

Bold And The Beautiful Spoilers – Flashback Scenes Of Lope

This will cause friction between Zoe and Xander, but there will be nothing they can do about what Emma chooses to do…or about what’s likely to happen to Emma now. Of course, they have no idea that Emma is with Thomas, or that Thomas has just threatened Emma.

Other B&B spoilers say that Hope will spend some time thinking back on her life with Liam Spencer (Scott Clifton). She just visited with Steffy, Liam, and Phoebe at the cliff house, and she’ll be feeling pensive after her interaction with them.

The Bold and The Beautiful Spoilers: Thomas Brings Friend To LA For Evil Plan – Vincent Does His Dirty Work? https://t.co/KNQScvbmzB pic.twitter.com/zGefoDNtBY

B&B viewers should see some nice flashback scenes as Hope looks back on her history and times with Liam. She’ll probably also think about what could have been, had Beth lived.