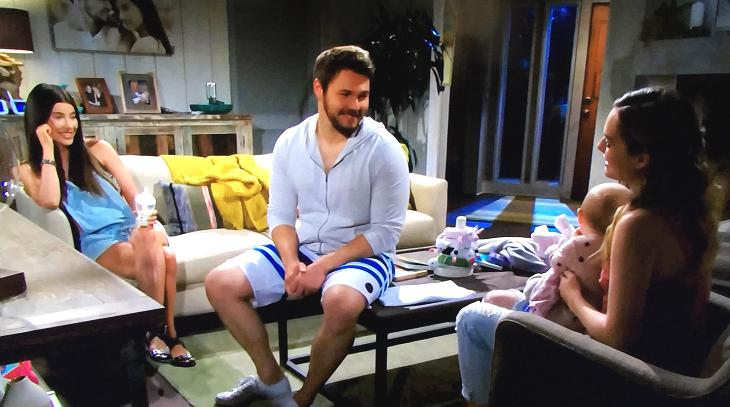 “The Bold and the Beautiful” (BB) recap for Thursday, June 20, 2019 reveals that over in the Forrester Creations studio, Emma Barber (Nia Sioux) exclaims, “Oh my God it’s true! Beth is alive!” She becomes hysterical demanding to know what happened and asks, “Where is Beth?”

Xander Avant (Adian Bradley) explains Steffy Forrester (Jacqueline MacInnes Wood) is raising her. Emma reels. She learns Zoe Buckingham (Kiara Barnes) has known for months and can’t understand why they haven’t told Hope Logan Spencer (Annika Noelle). Emma declares Hope must know her little girl is alive. They stop her from phoning Hope, but Emma shames them and stalks off.

In the office, Brooke Logan Forrester (Katherine Kelly Lang) finds Thomas Forrester (Matthew Atkinson) sketching another design for Hope and suggests her daughter needs time to heal. Thomas wants the best for the line and Hope and states he’s in love with her. Brooke notes Thomas has had issues in the past and asks him to focus on Douglas, not Hope.

Thomas understands she doesn’t approve of his interest in Hope, but he believes they’ve spent enough time apart to know what they want. “Hope’s future is with Douglas and me, and I’ll do anything to make that happen.” After, Thomas fantasizes about marrying Hope he snaps out of it when Zoe calls about Emma. In the hallway, Emma asks Pam Douglas (Alley Mills) if she’s seen Hope.

B&B’s Pam walks off and Thomas appears. He invites her into the office and tells her to stay out of this. She gawps, “You’re in on this too?!” They argue and Emma shrieks that Hope’s baby is alive. Thomas warns her to keep her voice down and reveals he’s planning a life for Hope with him and Douglas. Emma maintains Hope needs the truth…right now. Thomas becomes threatening. “I am dead serious. You do not want to mess with me!”

At the cliff house, B&B’s Liam Spencer (Scott Clifton) worries he’s become an annoying house guest but Steffy assures him she’s happy he’s there spending time with the girls, but she’s concerned about his issues with Thomas Forrester. Liam feels for Douglas, but Thomas doesn’t get to use him to get closer to Hope.

Steffy says Thomas cares about Hope and wants her to know he’s there for her. She goes to Phoebe and Liam answers a knock, which is Hope. She wants to see the happy family for herself. Liam is glad she could come by and says he misses her. She misses him too.

Steffy reappears with Phoebe and Hope greets the baby, then holds her. They smile as the baby coos when asked if Liam’s her daddy. Hope eventually hands the baby back to Liam. B&B’s Steffy tells Hope she’s welcome anytime. It gives Hope joy knowing the girls have their parents together. Steffy takes the baby to the bedroom and Liam brings up Thomas.

She needs to move on as Liam has, and Thomas has been supportive. She’s taking one day at a time. Hope knows they’d still be together if Beth were there. They embrace. And that’s a wrap. Don’t forget to check often with Hollywood Hiccups for all your soap needs.