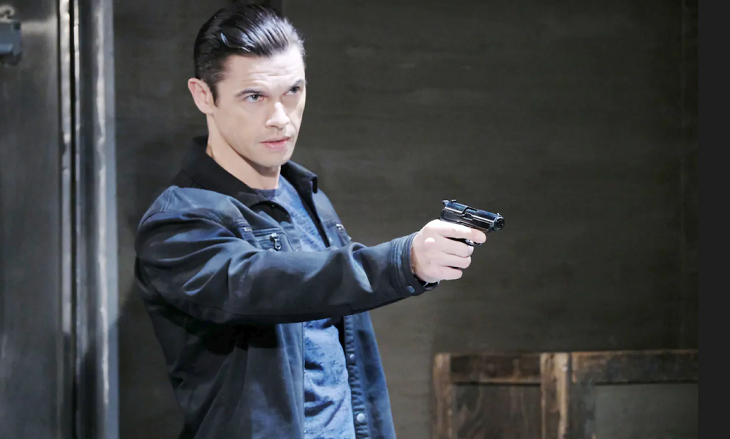 “Days of Our Lives” spoilers for Friday, June 21, tease that Eric Brady (Greg Vaughan) will get some advice from his meddling sister. Sami Brady (Alison Sweeney) has a knack for sticking her nose where it doesn’t belong, so Eric may suggest she should let him handle his feelings.

Sami won’t think it’s fair for “Nicole” to add to Eric’s pain over Holly Jonas’ (Harlow and Scarlett Mallory) “death.” She’ll contend that Eric isn’t to blame and shouldn’t be made to feel like he is.

Days Of Our Lives Spoilers – Nicole Walker A Mom In Mourning

“Days of Our Lives” spoilers say Eric may defend “Nicole” as a mom in mourning, which Sami will understand. Even so, she won’t want Eric feeling guilty or spending all his time pining.

Days Of Our Lives Spoilers: Gabi And Kate Sense Something’s Off With “Nicole” – Kate Snoops For Clues

Of course, Kristen DiMera (Stacy Haiduk) is actually posing as Nicole and attempting to win Brady Black’s (Eric Martsolf) heart. She needs Eric to believe there’s no chance for them, and she’s seemingly pulled that off. For now, Kristen will tackle a different problem. She’ll have to figure out what she’s going to do about Ted Laurent (Gilles Marini).

Ted’s down in the DiMera tunnels, but he can’t stay there forever. DOOL fans can expect a deadly order on Friday. Kristen will instruct Xander Cook (Paul Telfer) to get rid of Ted permanently, which he may be OK with at first. However, Xander will ultimately surprise himself by connecting with Ted. He’ll soon find that he doesn’t want to kill his French partner in crime.

Days Of Our Lives Spoilers – Ben Weston Gets Blasted

Other “Days of Our Lives” spoilers say Eve Deveraux (Kassie DePaiva) will blast Ben Weston (Robert Scott Wilson). They’ll have another heated faceoff over the attempted murders she’s trying to pin on him. It’s worth mentioning that Ben will be a free man by next week. Whether he somehow wiggles out of the charges or just gets out on bail, Ben will be able to roam the town and face disapproval.

Friday’s episode could set that up, which could lead to Eve’s fierce outburst. As for Hope Brady (Kristian Alfonso), she’ll suspect that something isn’t quite right. “Days” spoilers reveal that Hope will try to crack the case, so maybe she’ll confront Ciara Brady (Victoria Konefal) about what she’s up to. Perhaps Hope will guess her daughter’s got a few tricks up her sleeve.

Days Of Our Lives Spoilers: Tripp And Claire Trick Claire– Will She Confess Her Dirty Deeds To Help Free Ben? https://t.co/0yuRftW5oz pic.twitter.com/zq88ExwsvV

Meanwhile, Tripp Dalton (Lucas Adams) will assure Claire that there’s no future for them. He’ll dump her for good and send her spiraling out of control. DOOL viewers won’t want to miss the next phase of Tripp and Ciara’s plot!

We’ll give you updates as other “Days” news and rumors emerge. Stay tuned to the NBC soap and don’t forget to check Hollywood Hiccups often for the latest “Days of Our Lives” spoilers, rumors, updates and news.