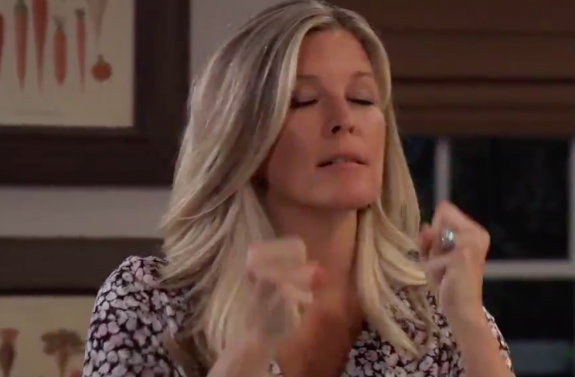 General Hospital spoilers tease that Carly Corinthos (Laura Wright) will disagree with some plans that Jason Morgan (Steve Burton) shares with her in Thursday, June 20th’s General Hospital episode, and she’s going to question whether those plans will work or not!

This could have something to do with the intel that Margaux Dawson (Elizabeth Hendrickson) gave Jason about Douglas Miller, a former Dawnie having died a suspicious death at the Beecher’s Corners Dawn of Day house; the suspicion is that Shiloh murdered him to get him out of the way when Lorraine Miller, aka Harmony Miller (Inga Cadranel) agreed to sleep with Shiloh and be drugged and tattooed as the first member of “The Trust” which is exclusively female, and of course sounds like Shiloh’s inner harem.

Douglas Miller was more than likely Harmony’s husband and Willow Tait’s (Katelyn MacMullen) father she emotionally mentioned had passed away to Detective Harrison Chase (Josh Swickard). Margaux wanted Jason to infiltrate the Beechers’ Corners Dawn of Day and try to get proof.

When he tells Carly this, she may disagree that he is the one to do so because when he first went there, he was arrested by Beecher’s Corners police who it turned out were members of the cult, which of course is why Margaux told him it needed to be someone that wasn’t a cop and also that Beecher’s Corners was out of the Port Charles jurisdiction.

Jason certainly won’t want Sam McCall (Kelly Monaco) to get herself involved even if Harmony is no longer there, and there may be the issue that Shiloh himself may be there in her absence; especially if he’s not been able to keep Michael Corinthos, (Chad Duell)who bought the Port Charles house, from evicting him and whoever else may be there and they have to go to Beecher’s Corners because they have no other choice!

Carly might disagree with Jason and Sonny Corinthos (Maurice Benard) choosing to find a legal way to take Shiloh down to begin with and wonder why they just don’t take him out and eliminate him permanently, and be done with it!

GH Spoilers: Shiloh Archer Has Told His Followers Something Has Happened To Him

The problem with that is that Shiloh has probably already told all his followers that if something happened to him, that Jason and Sonny would have been responsible, and especially Jason! Stay tuned to General Hospital and keep checking General Hospital spoilers frequently for all the latest news, updates and developments!