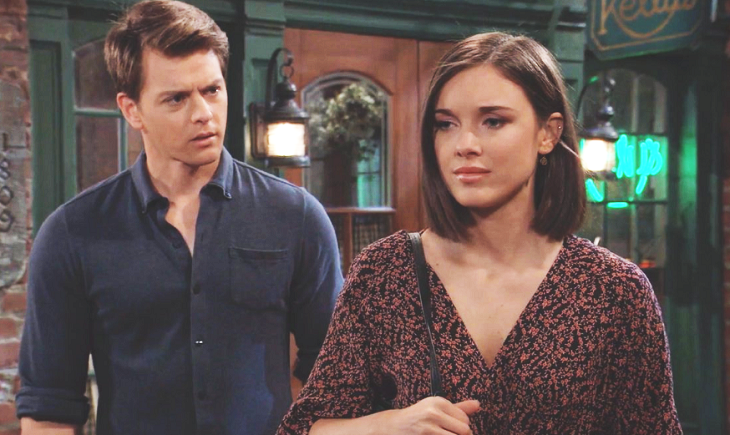 Diane Miller (Carolyn Hennesy) notices Alexis’ attraction to Neil. Alexis tells Diane that Neil is both her and Kristina Corinthos-Davis (Lexi Ainsworth) therapist. Diane advises Alexis to find a new therapist and have a fling with Neil. Diane decides to check on Neil’s past herself. She finds a death notice associated with Neil’s past. Diane shows a death notice of Neil’s daughter to Alexis.

General Hospital’s Kevin Collins (Jon Lindstrom) is welcomed back to work. Neil shows up at Kevin’s office and wants to have a session with him. Neil is having feelings for a patient. Neil says he has been where his patient is and feels he can help her. Kevin says if it isn’t in the past, Neil cannot burden his patient with his concerns. Neil says it is hard to tell the line cross.

General Hospital’s Drew Cain (Billy Miller) is at the hospital trying to get up the energy to go home. Franco Baldwin (Roger Howarth) talks to Drew about the trip to scatter Oscar Nero’s (Garren Stitt) ashes. Drew tells Franco that Kim Nero (Tamara Braun) isn’t doing very well. Franco believes it will take time for Kim to put things back together, and she is lucky to have his help.

Franco admires Drew for the send-off he gave Oscar. Drew has someone Franco can do for him. Drew wants to grab a beer sometimes with Franco and just to be a friend. He invites Drew to his and Liz’s wedding reception. Franco feels selfish, talking about a celebration right now. Drew says it will mar Oscar’s memory to let his dead impede living. Liz arrives and tells Franco about her conversation with Kim. Kim calls Drew and invites him to dinner tomorrow night.

General Hospital’s Liz Baldwin (Rebecca Herbst) stops by to check on Kim. Kim invites her in to talk. Liz brings a casserole for Kim and Julian Jerome (William DeVry). Kim says the mornings are the hardest because she has to face it all over again. Kim says, landing in Port Charles after her trip brought another level of pain. Liz says Kim can always lean on her and Julian as well.

Kim tells Liz about her proposal to Julian. Liz wants Kim to consider why she would want a baby right now. Kim tells Liz she doesn’t know how to go on not being someone’s mother. Liz explains that Kim will always be a mother; she doesn’t need another baby for that. She encourages Kim to give herself time. Liz offers to stay with Kim, but she plans to go to bed. Liz tells Kim to call her anytime.

General Hospital’s Carly Corinthos (Laura Wright) and Jason Morgan (Steve Burton) are at the Corinthos compound. Carly is trying to keep busy because Sonny Corinthos (Maurice Benard) has gone to the police station to help Jocelyn Jacks (Eden McCoy). Carly is frantic, and Jason realizes something else is going on with her. Jason knows how to stay under the radar.

Jason isn’t leaving tonight, Carly says he’s doing this to keep her at home. He thinks Carly is doing the right thing staying home. Carly tells Jason about the séance. Carly says Jocelyn needs to start moving on away from Oscar. She says this might be giving Jocelyn something else to focus on right now. Jason takes off, so Jocelyn doesn’t have one more person hovering around. Carly melts down when Jocelyn arrives home. Sonny walks in with Dev (Ashton Arbab) in tow.

General Hospital’s Sonny and Jocelyn are at the PCPD; Sonny wants to speak to Dev alone. Sonny asks why Dev was trying to rob his son. Dev says he went to Sonny’s first and then went to Dante’s house. He asks why Dev has come to the states. Dev got some money from Raj’s compound and wants Sonny to help him because he is afraid of getting killed in Turkey. Sonny wants to speak to Lulu Falconeri (Emme Rylan) in private. Sonny tells Lulu what Dev has said to him. Lulu tells Harrison Chase (Josh Swickard) that Dev stopped the robber. Sonny says Dev is a friend of the family.

Willow was about to leave for the meeting, and Harmony Miller (Inga Cadranel) stopped her for the initiation. Willow made plans to have breakfast with her father, and he never showed up. She went to her father’s room and found him dead on the floor. Willow apologizes for her meltdown, Michael says she can’t blame herself. Michael tells Willow it took courage to break away. Willow is afraid Shiloh Archer (Coby Ryan McLaughlin) will find the baby.