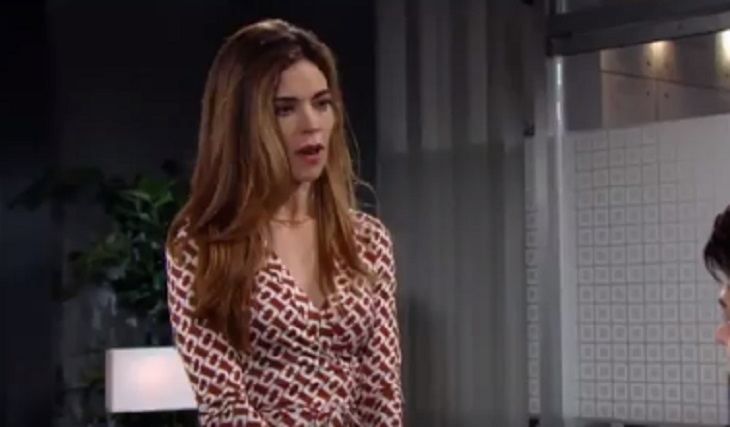 “The Young and the Restless” spoilers for Friday, June 21, tease that Sharon Newman (Sharon Case) will talk to Rey Rosales (Jordi Vilasuso) about her faceoff with Adam Newman (Mark Grossman). At the cottage, Sharon insists she made her position clear. Adam is going to stay away from her, so Rey seems pleased that Sharon stood strong.

When Nick Newman (Joshua Morrow) arrives, he has a task for Rey. Adam undoubtedly plans to show the court that he’s a changed man. Nick has to prove that isn’t true, but he needs Rey’s help to do it. Rey resolves to show some recent bad behavior. Riza Thompson (Tina Casciani) might be able to help him out in Vegas.

Meanwhile, Billy Abbott (Jason Thompson) rants about Adam’s appearance at the cemetery. Adam just wanted to tell Delia Abbott (Sophie Pollono) he’s sorry, but Billy notes that Adam shouldn’t be there. He mentions the lingering pain and points out that Adam isn’t even trying to be a better man.

Young And The Restless Spoilers – Billy Kicks Adam Out Of Graveyard

After Adam is ordered out of the graveyard, he winds up at Crimson Lights. Sharon is surprised to see him, but she’s willing to listen when he mentions his terrible day. Adam decides he’d better leave and avoid dragging Sharon into his drama. Back at home, Sharon keeps quiet about her Adam sighting and lets Rey know she’s happy to be with the guy she loves.

Adam’s day doesn’t get much better when he enters the penthouse. He reflects on memories of Chelsea Newman (Melissa Claire Egan) and Connor Newman (Gunner and Ryder Gadbois) before Phyllis Summers (Michelle Stafford) appears. She waltzes downstairs and gripes about the kidnapping before revealing something surprising.

Phyllis suggests she learned a lot during her trip to Las Vegas. She alludes to Adam’s connections there. One link to a certain Chancellor family member left her particularly intrigued. At Newman Enterprises, Victor Newman (Eric Braeden) tells Victoria Newman (Amelia Heinle) that he’ll be taking more time away to focus on his health. He wants Victoria to take over as CEO.

Young And The Restless Spoilers – Victoria Worries About Victor

Victoria’s concerned about her father’s condition, but he’s merely facing the reality of it and adjusting his life. She thinks it’s good that Adam rejected the offer and vows to make Victor proud. At Nick’s house later, Victoria pops in and makes an enticing pitch. She wants Nick to join her as COO so they can plot against Adam together. Victoria hopes they’ll push Adam too far and sabotage his shot at getting custody of Christian Newman (Jude and Ozzy McGuigen).

At Society, Traci Abbott (Beth Maitland) is thrilled to see Jack Abbott (Peter Bergman) having fun with Mallory and mingling with other guests. Jack ultimately makes a speech about the Abbott-Winters foundation, which is using the money donated in Neil Winters’ (Kristoff St. John) for a great cause. It’ll go to a treatment program for artists with special challenges in their fight to get sober.

Cane Ashby (Daniel Goddard) chats with Traci, but their evening is derailed by Lily Ashby’s (Christel Khalil) arrival. Lily speaks to Elena Dawson (Brytni Sarpy), Traci and eventually Cane. Traci steps out at one point and tries to deal with her complex feelings. She considers how her novel character, Velma, feels before Cane reappears to take her home.

Over with Devon Hamilton (Bryton James), he heads home and has another vision of Hilary Hamilton (Mishael Morgan). The stress of the evening finally catches up with Devon, so he has a panic attack and clutches his chest. Elena rushes to get Devon’s pills and tend to him.

“The Young and the Restless” spoilers say Devon will continue to struggle with grief and guilt, so it’ll be interesting to see how it affects his relationship with Elena. We’ll give you updates as other Y&R news and rumors emerge. Stay tuned to see what’s ahead in Genoa City.