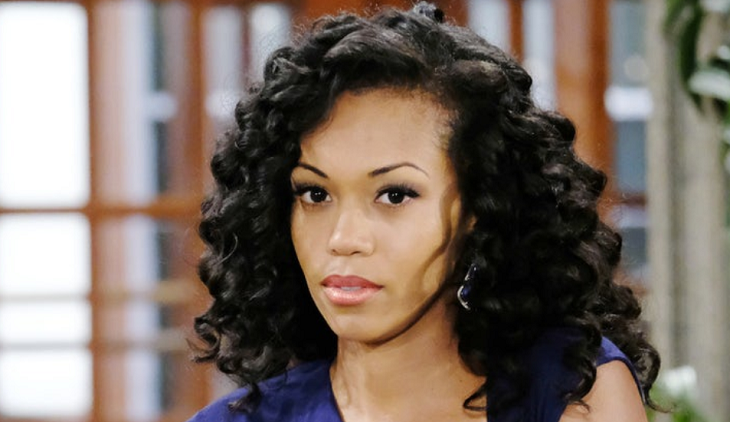 Young And The Restless (Y&R) spoilers tease that Mishael Morgan, the actress who portrayed Hilary Curtis, has been rehired. And TV Source Magazine is reporting that sources have confirmed Hilary will return as more than a ghost this time.

Morgan left the show in July 2018 when she and Y&R producers couldn’t agree on the terms of a new contract. Fans were outraged when they killed off Hilary and even flew a plane over the CBS studios, demanding her return to the sudser.

A pregnant Hilary died in hospital after a horrific car accident involving Lily Winters (Christel Khalil), who ended up serving almost a year in prison for her role in the death. After finding out the tragic news that she had lost her baby, Hilary thought she was going to make a recovery. But she began to suspect she had been more critically injured than she had first thought and her best friend Phyllis Summers (Gina Tognoni) reluctantly admitted to her that she was right.

Young And The Restless Spoilers – Another Unexpected Shocker

Hilary and the love of her life, Devon Hamilton (Bryton James) were then tearfully married in her hospital room, with friends and family by their side. She passed away shortly afterward.

Since then, Devon has mourned the death of his wife and unborn baby and was hit by another shocker recently when his father Neil Winters (Kristoff St. John) also passed away unexpectedly.

Devon has moved on during the past couple of months with Elena Dawson (Brytni Sarpy) but has been haunted by sporadic visions of Hilary’s ghost.

Young And The Restless Spoilers – A Brand New Character?

Morgan also returned to the Y&R for one of the special tribute episodes to St. John back in April. At the time, she announced that she would be returning for a couple more episodes. Fans were disappointed she was only going to make a couple of appearances as Hilary’s ghost.

Could Hilary have survived her critical injuries after all? Will she make a triumphant return from the dead? Or, as another rumor making the rounds teases – Morgan may come back as a character other than Hilary.

Could she return as a Hilary look-alike, or a long-lost twin sister? So far, producers haven’t commented on the rumors. Y&R viewers will just have to keep watching to find out!