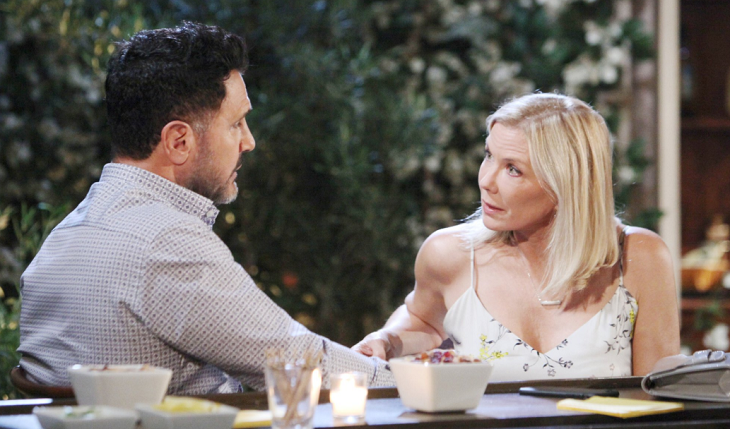 The Bold and the Beautiful spoilers for Monday, June 24, tease that Thomas Forrester (Matthew Atkinson) will face the aftermath of his decision to chase Emma Barber (NIa Sioux) down the highway, as she was on her way to tell Hope Logan (Annika Noelle) that her daughter is alive. As B&B viewers know, Emma lost control of her car during the chase, and her car went over an embankment.

On Monday’s episode, B&B viewers will get to see what Thomas does next. He’ll need to think on his feet, since emergency crews will soon arrive, and the police may have questions for him about what transpired in the moments leading up to the accident. Or perhaps he’ll leave the scene and pretend that he was never following Emma.

At any rate, Thomas will have to take into account that Pam Douglas (Alley Mills) saw him in the middle of a tense conversation with Emma at Forrester Creations shortly before the accident. Perhaps Thomas will make up some story about why he needed to follow Emma and say that he witnessed the accident from afar.

Bold And The Beautiful Spoilers – Anyone Could Spill The Secret

Of course, Thomas’ problems won’t be magically gone now that Emma has died. He’ll still have to deal with keeping the secret about Hope and Liam Spencer’s (Scott Clifton) daughter. After all, Zoe Buckingham (Kiara Barnes), Xander Avant (Adain Bradley), and Florence “Flo” Fulton (Katrina Bowden) all know the truth and are liable to spill the secret when they learn about Emma’s death.

Bold And The Beautiful Rumor: Liam Chooses To Stay With Steffy After Baby Reveal

Meanwhile, on Monday’s new episode of B&B, Brooke Forrester (Katherine Kelly Lang) will have a chat with Bill Spencer (Don Diamont). Brooke will want to get his take on a situation that has been bothering her…the situation between Thomas and Hope.

Brooke doesn’t like Thomas’ obsession with Hope, and she thinks that he might be dangerous. As B&B viewers know given what just happened to Emma, Brooke is right but she can’t seem to get anyone to listen. But on Monday’s episode, she’ll confide in Bill about Thomas and seek his advice.

Bold And The Beautiful Spoilers – Fully Supportive Of Steam

But according to B&B spoilers, Brooke won’t like what Bill has to say. Of course, Brooke is still holding out hope that somehow Liam and Hope will get back together. She doesn’t want to see Hope move on with anyone, let alone Thomas.

But Bill will reveal that he fully supports Liam and Steffy Forrester (Jacqueline MacInnes Wood) being together. He’ll let Brooke know that he’s tired of Liam going back and forth between two women, and that he really wants things to work out for “Steam.”

Brooke won’t like Bill’s take on the matter, and although it seems he’ll agree about Thomas’ behavior seeming shady, he might suggest that Hope could be happy if she moved on with Thomas. At any rate, Bill won’t help Brooke to cheer on a “Lope” reunion, and Brooke will be dismayed.