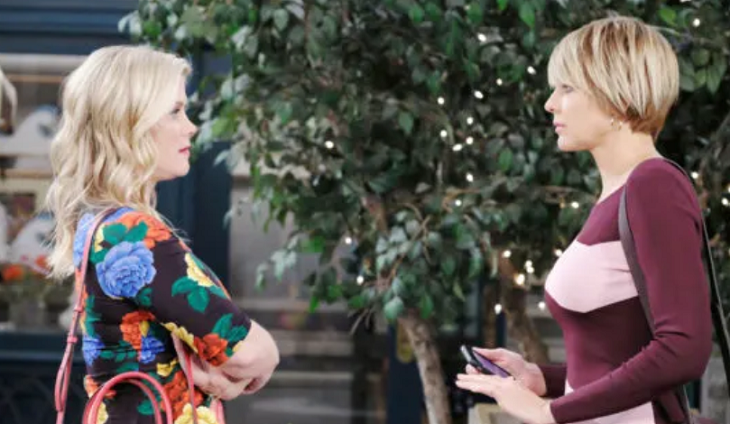 “Days of Our Lives” spoilers for Monday, June 24, tease that Sami Brady (Alison Sweeney) will manage to rile up “Nicole Walker” (Arianne Zucker). Of course, DOOL fans know “Nicole” is actually Kristen DiMera (Stacy Haiduk). Even so, Kristen won’t appreciate Sami’s smart mouth. As their confrontation heats up, “Nicole” will smack Sami right across the face to shut her up.

A shocked Sami will be furious, so she’ll slap “Nicole” back almost immediately. It looks like there’ll be a close call involving “Nicole’s” mask, but Kristen will play it cool and keep her plot chugging along.

Meanwhile, Ted Laurent (Gilles Marini) will be in panic mode. Xander Cook (Paul Telfer) is aiming a gun at him, so no one can blame Ted for being freaked out!

Days Of Our Lives Spoilers – Xander Cook Not Keen On Killing

“Days of Our Lives” spoilers say Ted will plead with Xander in Monday’s episode. He’ll spell out all the reasons why Xander should let him live, so Xander will cut the guy a break. Based on his earlier conversation with Kristen, it’s clear that Xander wasn’t keen on killing Ted anyway. He’ll let Ted live, but that means he’ll have to find another strategy to tie up the loose end.

Other “Days” spoilers reveal that Kate Roberts (Lauren Koslow) will do some snooping. She’ll take a peek around “Nicole’s” room and rummage through a few of her belongings.

Kate will hope to score evidence of “Nicole’s” shady behavior, but she’ll take a little too long. When “Nicole” catches Kate red-handed, she’ll rip into Kate for her sneaky behavior and demand an explanation.

Days Of Our Lives Spoilers – Eric Brady In A Sticky Situation

While Kate handles that crisis, Eric Brady (Greg Vaughan) will be in a sticky situation of his own. “Days of Our Lives” spoilers state that Rex Brady (Kyle Lowder) will stand by his ASAP wedding plans. He wants to marry Sarah Horton (Linsey Godfrey) in the chapel, but she’s clearly not loving the idea.

Nevertheless, Rex will remain pushy as he urges Eric to officiate. Once Eric’s on board, Sarah just won’t be able to say no! We’ll give you updates as other “Days” news and rumors emerge.