Days Of Our Lives Spoilers & Recap Friday, June 21: Ciara And Tripp’s Plan Is In Motion – Hope Searches For Ted 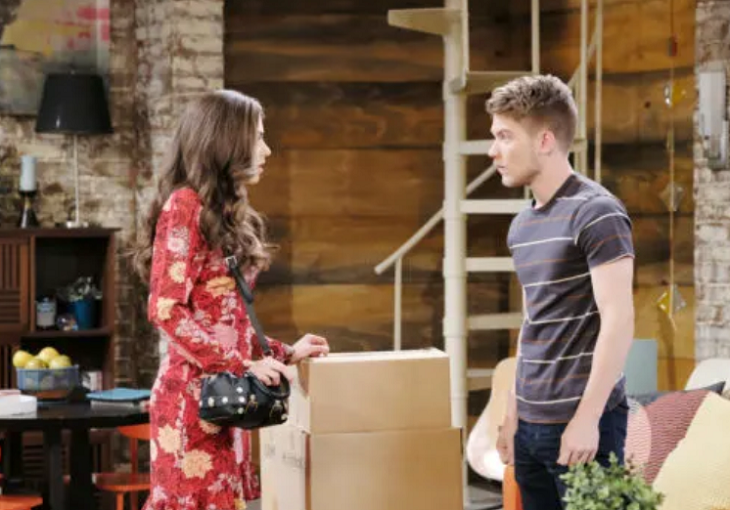 Days of Our Lives (DOOL) recap for Friday, June 21, 2019, reveals Ciara Brady (Victoria Konefal) is leaving the pub and meets Hope Brady (Kristian Alfonso) outside. Ciara goes to visit Ben and tells him that Caroline Brady (Peggy McCay) died. Ciara tells Ben about making cookies at the pub when she was younger. Ben asks Ciara if everything is going according to plan. She tells Ben she and Tripp Dalton (Lucas Adams) know how to get Claire Brady (Olivia Rose Keegan) to confess.

Ciara tells Ben she and Tripp are going to get back together. Ben is afraid that Claire will try to hurt Ciara again. Ben tells Ciara he’s not going to let her do this. Ciara kisses Ben before leaving the police station. Eve demands to know what Ciara is doing there. She lies and said she came to tell Ben she never wants to see him again. Ciara apologizes to Eve and leaves. Eve comes in and confronts Ben about the key that Ciara gave him. Eve demands Ben give her that key.

Days of Our Lives Eve Donovan (Kassie DePaiva) tells Ben Weston (Robert Scott Wilson) she nailed down his motor from setting the fire that almost killed Tripp and Haley Chen (Thia Megia). Eve approaches hope and tells her that Ben has been arrested. Hope wishes Eve good luck on finding a D.A. Eve thinks Hope should be on her knees thanking her. Hope says she knows what it is like to lose a child. Eve wants Hope to get Ted to take his old job back. Hope tells Eve that Ted would never work for her and Jack.

Days of Our Lives Sarah Horton (Linsey Godfrey) reflects on her conversation with Eric Brady (Greg Vaughan) in the chapel. Rex tells Sarah he wants to get married right now. Sarah does not agree with Rex’s idea. Sarah explains that their parents are expecting a big wedding; they can’t do this right now. Rex thinks they have waited long enough and offers to make the arrangements himself. Rex wants to know if there is some other reason that Sarah doesn’t want to marry him.

Days of Our Lives Ted Laurant (Gilles Marini) finds himself locked in a room. Ted realizes that Nicole Walker (Arianne Zucker) knocked him out. Meanwhile, Kristen tells Xander Cook (Paul Telfer) they need to take care of Ted. Kristen tells Xander that Ted has to be killed. Xander is stunned that Kristen wants Ted killed.

Xander tells Kristen she should be the one to kill Ted. Kristen says this is Xander’s mess to clean up. Hope knocks on Nicole’s door looking for Ted as Xander goes to Ted’s room in the tunnels. Nicole rushes off, telling Hope she can’t help her. Hope calls Ted’s phone and hears it ringing In Nicole’s room.

In the latest #DAYS, Ciara and Tripp are determined more than ever to prove Claire is the culprit.https://t.co/ZsCmioRrzb pic.twitter.com/QdwwKjp0ji

Days of Our Lives Claire arrives at the loft and tries to kiss Tripp. Tripp pulls away from Claire and says they need to talk. Tripp tells Claire that he and Ciara need to lean on someone right now. Claire is losing it when Tripp tells her he has a bond with Ciara. She tells Tripp he will be sorry that he ever hurt her. Claire starts throwing things and walks out. Ciara arrives home, and Tripp tells her that phase one has been handled.