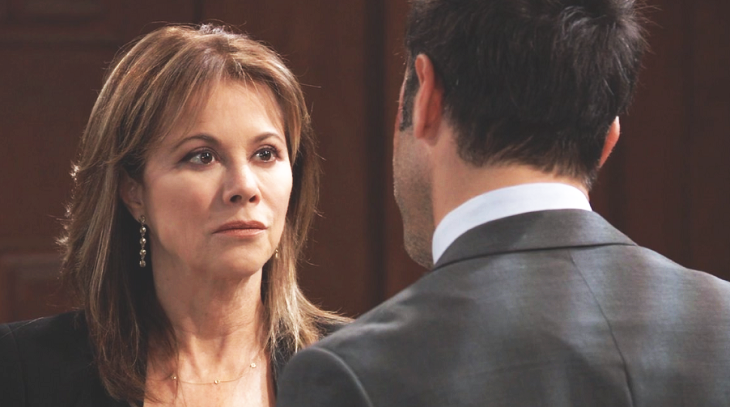 Dev seems to be extremely hungry. Jocelyn asks Dev how he knows Sonny. Jocelyn says she called Sonny for him. Dev says Jocelyn got him arrested. Carly and Sonny discuss Dev’s situation. Jocelyn wants Dev’s real name. Sonny is leaving for a little while to help sort things out with Dev. Dev asks where Sonny has gone, Jocelyn says Sonny doesn’t involve her in business. Carly sends Jocelyn to the boathouse to get a toy. Carly questions Dev about the time in Turkey.

General Hospital’s Lulu Falconeri (Emme Rylan), Franco Baldwin (Roger Howarth), and Liz Baldwin (Rebecca Herbst) arrive at the school with cupcakes for Willow Tait’s (Katelyn MacMullen) class. Everyone has gifts for Willow, and she hopes to be able to celebrate tonight. Valentin and Nina arrive for Willow’s speech. Willow needs to get to court but is delayed by the parents.

General Hospital’s Diane Miller (Carolyn Hennesy) is at the courthouse and calls Willow, demanding she is there on time. Alexis Davis (Nancy Lee Grahn) wants to discuss strategies, Diane doesn’t want Shiloh Archer (Coby Ryan McLaughlin) to see them together. Shiloh walks in and says its too late for that. Shiloh says he just wants to know his child. Shiloh invites Diane to take a class at DOD. Shiloh apologizes to Alexis for failing her. Shiloh tells Alexis her daughters came up with their issues. Alexis tells Shiloh he is in no position to judge her as a parent.

Diane speaks to Shiloh’s attorney in the hallway. Shiloh tells Alexis that nothing will erase Kristina’s pledge and talks about how she hurt Kristina. Alexis tells Shiloh that Kristina’s pledge is leverage or old news. Shiloh says he can’t give up on Alexis or her daughter because they have more work to do. She tells Shiloh not to think about contacting her daughters. Alexis warns Diane that Shiloh will walk, he needs to be in prison or in the ground.

General Hospital’s Valentin Cassadine (James Patrick Stuart) meets with Curtis Ashford (Donnell Turner), he has a job for him. Valentin wants Curtis to find information on Jasper Jacks (Ingo Rademacher). Nina talks to Valentin and tells him she threatened to quit Crimson.

Nina tells Valentin she wouldn’t not quit Crimson any more than she would quit him. The kids have their award ceremony, and Aiden Spencer (Jason David) and Charlotte Cassadine (Scarlett Fernandez) give Willow gifts. The principal needs to speak to Willow before she leaves. Willow is due in court at the same time. Nina complains because Charlotte didn’t get an academic award.

General Hospital’s Jax and Nina Reeves (Cynthia Watros) meet and discuss her plans for Crimson. Nina wants Jax to back off and let her run the magazine without him. Jax doesn’t think Crimson will be a success unless they work as a team. Nina threatens to quit, Jax asks if she wants to leave the magazine.

Robert Scorpio (Tristan Rogers) joins Jax at the table. Robert tells Jax that his brother better not show up around Robin Scorpio-Drake (Kimberly McCullough) or he will dismember him. Curtis talks to Jax about his job offer with Drew Cain (Billy Miller). Curtis needs to know everything there is to know about Jax.

General Hospital’s Sonny Corinthos tells Robert that he owes him. Sonny wants to know why the bureau isn’t protecting Dev. Robert informs Sonny he is no longer with the bureau. He says they offered Dev a new identity, location, and money but he didn’t want that. Robert tells Sonny that Dev seems to be good at taking care of himself. Sonny arrives and tells Carly that the WSB has washed their hands of Dev. Dev is now Sonny’s cousin Devon.