Young And The Restless POLL: Is Rey Fighting A Losing Battle With Sharon And Adam? Vote Now! 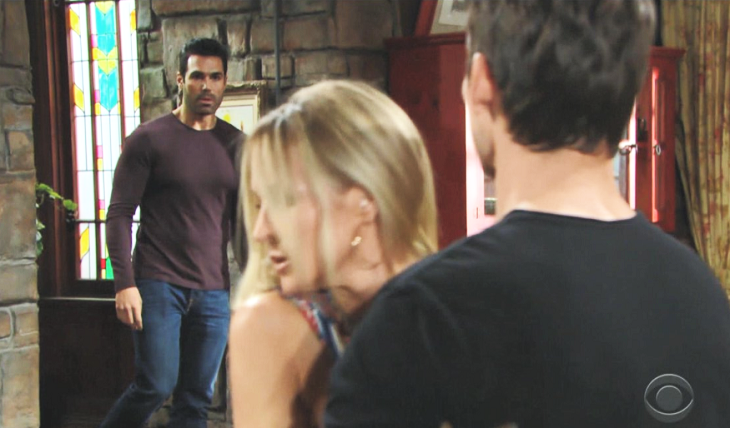 The Young and The Restless (Y&R) spoilers tease that Rey Rosales (Jordi Vilasuso) may be fighting a losing battle with Sharon Newman (Sharon Case) and Adam Newman (Mark Grossman). He had hoped he could keep them apart, but it is looking like that might be an impossible task.

Sharon keeps telling Rey that he has nothing to worry about with Adam, but it’s clear that is not completely true. Sharon is drawn to Adam and she cannot stay away, no matter how infuriating he gets. Here’s what you need to know about what’s ahead on Y&R.

This isn’t Rey’s fault, by any means. He doesn’t understand how deep Sharon and Adam’s history is. In fact, when the last Adam, played by Justin Hartley, barely paid attention to Sharon on the show, many Y&R fans were upset.

Young And The Restless Spoilers – First Person She Would Call

These are two characters that are passionate (in general) and have a deep connection to each other. Some of their shared history is not good at all. Adam stole Sharon’s child and he told her daughter died. It took her several months to learn the truth and have her baby returned to her. Yes, that’s terrible, but she forgave him and she even stayed with him.

Whenever she was in trouble, Adam was the first person she would call in difficult times. And, Y&R showed that Adam was always there. That was until Chelsea Newman (Melissa Claire Egan) put a stop to it and she made him decide if he wanted a family with her or Sharon.

And, it wasn’t an easy choice for Adam. In the end, he chose his family with Chelsea and turned his back on Sharon. But that didn’t erase their connection and history.

Shadam (Sharon and Adam) has a huge fan-base. They have been touting that Sharon will reunite with Adam since it came out he was returning to the show. Mark and Sharon have great chemistry, so many would support that if that’s where the storyline heads.

Y&R spoilers tease that Sharon thinks she has things under control with Adam. She thinks she can handle him and keep him at a distance. However, he is getting in her head and she finds herself drawn to him. Rey is fighting a losing battle with Sharon.

Y&R spoilers suggest that, in time, Sharon and Adam will hit the sheets and Rey’s heart will be broken. Right now, it’s looking like Chelsea might not want to reunite with Adam as she wants to keep her son as far as she can from him.

Do you think Rey is too trusting? Will Sharon end up hurting him with Adam? Vote in our poll below.