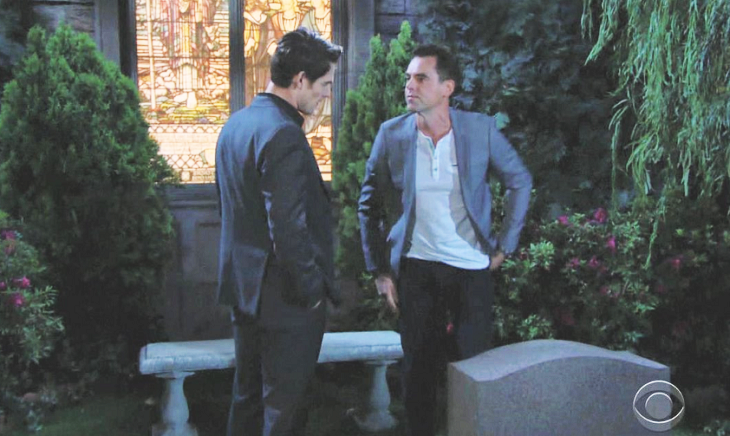 “The Young and the Restless” (YR) recap for Friday, June 21, 2018 reveals that at home, Rey Rosales (Jordi Vilasuso) admires Sharon Newman’s (Sharon Csse) taste in wine. Talk turns to Adam Newman (Mark Grossman) and she wishes she hadn’t encouraged him to come home and told him so. Rey learns he agreed to stay away from her but wasn’t happy about it. He thanks her for taking a strong stance.

Nick Newman (Joshua Morrow) arrives to see Rey about Adam. He wants dirt for the custody trial and needs to know what Adam got up to in Vegas. Nick and Sharon know he’ll try to make the case he’s turned his life around. Rey realizes Nick needs recent evidence he hasn’t. Sharon leaves. Rey tells Nick about Adam’s associate, Riza Thomas (Tina Casciani). He’ll contact her.

At Delia Abbott’s (Sophie Pollono) grave, Billy Abbott (Jason Thompson) asks Adam Newman what the hell he’s doing there. Adam didn’t mean to intrude. Billy fumes and says if there’s one place in the entire world he shouldn’t step foot in, this is it.

Young And The Restless Spoilers – Dedication To Neil Winters

Adam wanted to tell Delia he’s sorry she’s not with her family just as he’s not with his children right now. He recalls there was a time Billy thought he could forgive him. Billy says the pain he feels doesn’t go away and seeing Adam not even trying to be a better man compounds the tragedy. He orders him to get the hell out of there.

Traci compliments Jack afterward and she’s glad to see him socializing. Jack learns she came with Cane and says he’s lucky to have her as a friend. After, Cane talks to Traci about pitching in on Jack’s treatment program. Suddenly, they notice Lily Ashby (Christel Khalil) arrive. Devon and Elena Dawson (Brytni Sarpy) greet her, followed by Jack and Mallory. Cane watches. Traci asks if he wants to say hello. He’s in no rush but keeps watching her.

Young And The Restless Spoilers – Ana Hamilton Is Unhappy

At the bar, Ana Hamilton (Loren Lott) complains to Devon Hamilton about hiring someone to babysit her. Devon snaps and asks did she forget what tonight is about? Elena Dawson chats with Lily Ashby, whose happy Devon’s found someone special again. She updates Lily on the tension between Nate Hastings (Sean Dominic) and Devon due to the penthouse sale.

Traci Abbott goes over to hug Lily, who then chats with Cane Ashby about the dedication and learns he and Traci came together. Elena kisses Devon goodbye to take Jett Carver (Gilbert Brown) to the airport. Outside, Cane finds Traci who is wrestling with her feelings through Velma. He takes her home.

At Newman Enterprises, Y&R’s Victor Newman (Eric Braeden) informs Victoria Newman (Amelia Heinle) that Nikki Newman (Melody Thomas Scott) thinks he should take some time off to focus on treatments. He’d like her to become CEO while he takes a leave of absence. Victoria worries his illness is worse than he’s letting on, but Victor’s merely facing the reality.

Victoria vows to make him proud and thinks Adam Newman did him a favor by walking away. Victor admires her integrity. They embrace. Victoria is working away when Billy Abbott arrives and gets up to speed. He congratulates her, then shares that Adam was at Delia’s grave. Billy warns Victoria to keep an eye on him. Victoria thinks she has a way to neutralize the threat.

Billy Abbott goes to Victor Newman’s office and tells him he approves of his choice. Victor wonders what makes him think he needs his approval. Billy vows to support Victoria Newman. Victor hopes he doesn’t self-destruct halfway through. Billy was going to say the same about him.

At Crimson Lights, Y&R’s Adam Newman tells Sharon Newman his day’s going terrible. He reveals he’s moving back into the penthouse since Victor Newman evicted him, then updates her he stopped by Delia Abbott’s grave and ran into Billy Abbott. Sharon’s sorry and offers to lend an ear. He promised not to involve her in his drama, so leaves.

At Nick Newman’s place, Victoria Newman tells her brother Dad made her CEO. He sneers she got everything she wanted. Victoria wants Nick as COO and points out the power it would give him against Adam Newman, whose fatal flaw is overconfidence. They’ll corner him and push him to the brink to show the court he doesn’t deserve to raise Christian.

At the penthouse door, Y&R’s Adam Newman flashes to Chelsea Newman (Melissa Egan) and Connor, then enters. Phyllis Summers (Michelle Stafford) comes down the stairs. “Hi there. Long time no see.” She complains about the hellhole he had her stashed in and tells him she knows more about him now – she went to Vegas. He accuses her of bluffing. She alludes to his connections in Vegas…especially to a certain member of the Chancellor family.

The Young and the Restless Spoilers: Paul’s Appearance In Traci’s Novel An Ode To His Father Carl https://t.co/nco2wrB7gL pic.twitter.com/Lh7DnhF9mu

At home, Sharon Newman neglects to tell Rey Rosales she saw Adam Newman and says she’s glad to be home with the man she loves. In his penthouse, Y&R’s Devon Hamilton sees Hilary Curtis (Mishael Morgan) walk in, but it’s actually Elena Dawson. He has a panic attack. She scrambles to get his pills as he struggles to breathe. And that’s a wrap. Don’t forget to check often with Hollywood Hiccups for all your soap needs.