Days Of Our Lives Spoilers: Xander Betrays Kristen – Lets Ted Live After She Orders His Death 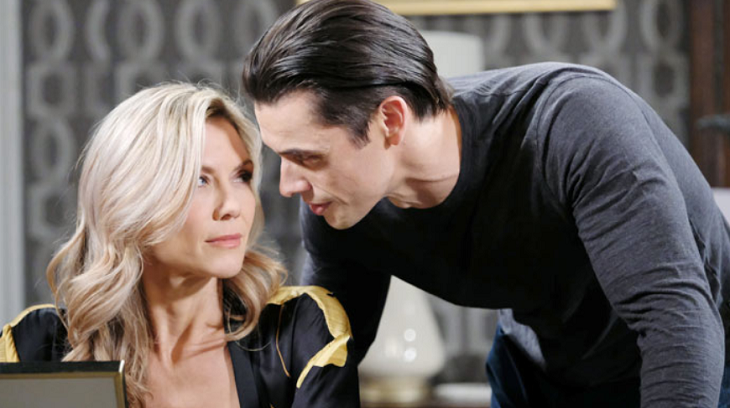 Days of Our Lives (DOOL) spoilers tease that Ted Laurent (Gilles Marini) has found himself in big trouble. He stole Holly Jonas’ (Harlow and Scarlett Mallory) autopsy report from Xander Cook’s (Paul Telfer) room at the Kiriakis mansion and offered it as proof to “Nicole Walker” (Arianne Zucker) that Holly is alive.

But as DOOL viewers know, Nicole is actually Kristen DiMera (Stacy Haiduk) in a Nicole mask, and Kirsten wasn’t at all happy that Ted went rogue and decided to spill the beans about Holly being alive. Kristen needs Holly to be dead in order to carry out her plan, and so she had to quickly do something about Ted, so she hauled off and knocked him out with a fireplace poker!

According to Days of Our Lives spoilers, after getting Ted locked up and under wraps, Kristen will decide that he’s got to be eliminated…permanently. He’s a loose cannon, and his desire to impress Hope Brady (Kristian Alfonso) by revealing that Holly’s alive has made him dangerous to Kristen and Xander.

Days Of Our Lives Spoilers – Risk He Could Run His Mouth

So Kristen will make a very “DiMera” move; she’ll order Xander to kill Ted and eliminate the risks associated with him being alive and predictably running his mouth. DOOL spoilers say that Xander will agree to perform the hit, and Kristen will impatiently wait for the deed to be done.

But then something interesting is going to happen. Days of Our Lives spoilers indicate that Xander just might grow a conscience. He’ll bond with Ted all of a sudden and think twice about eliminating him. Of course, we’ve recently seen Xander’s softer side in his developing relationship with Maggie Kiriakis (Suzanne Rogers), so there’s a caring individual underneath all that bravado.

It looks like we’ll see that caring person emerge again as Xander contemplates what Kristen asked him to do to Ted. After Xander and Ted interact a little, Xander will apparently decide to let Ted live, while leading Kristen to believe that he carried out her orders.

Days Of Our Lives Spoilers – Ted Laurent Needs To Disappear

Of course, that will probably mean that Ted will need to disappear if he wants to stay alive. After all, Kristen’s not beyond killing Ted herself if she were to find out that he is alive! As DOOL viewers probably know by now, Gilles Marini, who portrays Ted, will be leaving the show this summer, so we may just see Ted voluntarily walk away from Salem for good.

But that will be tough for Ted, since he’s obsessed with Hope. But if he wants to stay alive, he’ll need to leave town and never come back! Do you think Ted will just walk away from Hope and Salem for good, to save his own life?