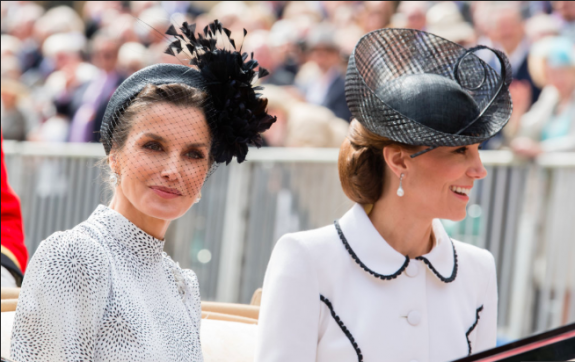 Is there another royal feud brewing here? That’s what a lot of royal fans can’t help but wonder as there’s new video footage that shows Kate Middleton apparently snubbing Queen Letizia of Spain. Here’s what you need to know.

While no one really knows what’s going on between Kate Middleton and Meghan Markle behind closed doors, it looks like the future Queen Consort of England is snubbing people left and right. At least, that’s what the media is reporting.

Earlier this summer it was reported that Kate Middleton was giving her former best friend Rose Hanbury the cold shoulder after reports suggested that she might have been getting a little too up close and personal with her husband, Prince William. If that weren’t enough, reports suggested that the Duchess of Cambridge wanted to “phase out” Rose from their posh circle of friends near their home in Norfolk.

Kate Middleton Walks By Queen Letizia Without Saying A Word

And now there’s a clip making the rounds on social media that makes it look like Kate Middleton failed to acknowledge Queen Letizia of Spain at the Order of the Garter on Monday. Some fans have been calling out the Duchess even though there are photos from the event that tell a different story.

In the clip that has been making the rounds, the Duchess of Cambridge gets out of the car but walks past Queen Letizia without saying a word or even looking in her direction. It’s a rather awkward moment that shows Letizia standing there while Kate Middleton walks right passed her.

However, photos from the event show that Kate and Letizia were actually having a good time together and at one point, were even deep in conversation with one another. While some people think that the Duchess might have snubbed the Spanish royal, others think that the video clip doesn’t tell the entire truth.

After all, it just shows a few seconds after Kate Middleton got out of her car and nothing more. In other words, this is much ado about nothing. Kate Middleton and Queen Letizia not only get along fine, but there’s nothing that indicates that there’s any beef between them.

The Duke and Duchess of Cambridge depart the #GarterDay service with The King and Queen of Spain — today King Felipe VI was installed as a Supernumerary, or ‘Stranger’, Knight of the Garter. pic.twitter.com/j135mD08FA