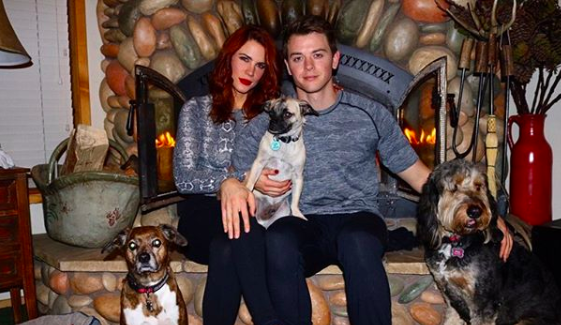 Father’s Day was full of sweet tributes on social media, and Courtney Hope made sure her boyfriend Chad Duell received some recognition as well. Sure, the couple may not share any children together, yet, but
they are the proud parents of three adorable dogs.

If you follow Courtney or Chad on social media, then chances are you have seen snapshots of their handsome pups in the past. This week Courtney created an adorable slide show of Chad Duell and their
“kids,” and raved about how great of a dog dad he is.

Courtney captioned the photos, “And a very happy Father’s Day to the best pup dad … His love for our fur babies is so beyond heartwarming. He spoils them effortlessly and cares soo much about
their happiness and well being and it makes me love him more.”

When the time comes, we have a sneaking suspicion that Chad Duell is going to be a great father. Ironically, Chad’s General Hospital character Michael Corinthos already is a father, and doesn’t even know
it.

General Hospital Spoilers: Chad Duell’s Character On GH Will Learn The Fate Of His Son

General Hospital spoilers tease that it’s only a matter of time before the explosive baby Wiley secret comes out, and we can’t wait to see the drama unfold. Currently, Michael is going above and beyond to protect his Uncles’ son Wiley from his cult-leader birth father. But, little does Michael know, Wiley is actually HIS son that he though died in childbirth.

Buckle up GH fans, the drama is just beginning, and don’t forget to head over to Courtney and Chad’s Instagram pages to see more pictures of their fur-babies.