General Hospital Spoilers: Ava Freaking, Afraid Jax Will Dig Up Dirt On Her and Put in Crimson 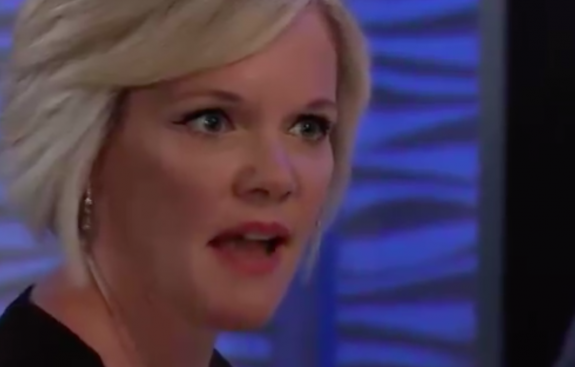 General Hospital spoilers tease that Ava Jerome (Maura West) will remain uneasy in Monday, June 24th’s episode of General Hospital. Perhaps Jasper Jacks (Ingo Rademacher) makes her nervous that he will dig up something and publish it in the cover story Nina Reeves (Cynthia Watros) is doing on her that will harm her chances in court when her case comes up to stand trial for the attempted murder of Ryan Chamberlain (Jon Lindstrom)!

Ava wants to tell her story, but she told Jax that she wanted to tell it on her terms, not his or anyone else’s! Ava may not trust him or Nina in spite of Jax’s promises to her in a recent episode of General Hospital when he met with her for drinks and fixed his mess that caused the whole thing to be sabotaged because of what he told Ava in front of Nina and Ava had told Jax it was a hard pass on doing the story!

Ava knows that Ryan is still a hot topic in the news and she cannot admit to stabbing him in the story even though it seems to be public knowledge; to do so would ruin her chances in court! It would be like an admission to the charges!

Ava doesn’t know Jax that well but something in her seems to be telling her not to divulge very much in her story! That was why she was hesitant to do the story to begin with. Ava was afraid she would tell her story but Jax and Nina would spin it to their advantage at her disadvantage!

Ava will likely remain uneasy about this cover story until she actually sees it in print, and she may demand of Jax and Nina that she approves the story as it will run in Crimson before she proceeds, even though she has signed off on doing the story in a previous recent episode of General Hospital.

Can Willow make it through the last day of school without incident? Click to watch today's dramatic, new #GH – RIGHT NOW: https://t.co/EG1DH7jai6

GH Spoilers: Ava Jerome Has Managed To Get Out Of Every Charge She’s Ever Faced

Ava has managed to squeak out of every serious charge she’s ever faced, and she and Nina are rivals going way back over twenty years when Ava was Silas Clay’s (Michael Easton) mistress and Nina was his wife, not to mention Nina inducing Ava’s labor and running off with Avery Corinthos (Ava and Grace Scarola) a few years ago when Nina wasn’t in her right mind!