Days Of Our Lives Spoilers: Sami and Nicole Fear Faceoff – The Gloves are Off 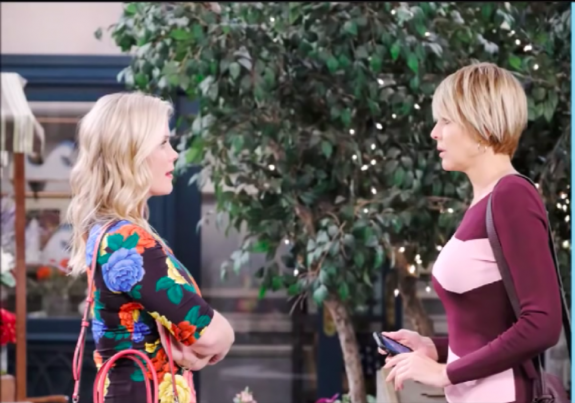 Days of Our Lives spoilers tease that Sami Brady DiMera (Alison Sweeney) will confront her old enemy “Nicole Walker” (Adrienne Zucker) over her treatment of her twin Eric Brady (Greg Vaughan) on Monday, June 24th’s episode of Days of Our Lives.

Days of Our Lives viewers know that it’s really not Nicole at all, but Kristen DiMera (Stacy Haiduk) masquerading as Nicole in a mask and wig, but no one except Xander Kiriakis (Paul Telfer) knows that in Salem.

Even though Sami didn’t like the idea of Eric and Nicole together to begin with, even when it was the real Nicole, her mistreatment of Eric and her accusations of it being his fault Holly Jonas (Scarlett and Harlow Mallory) was kidnapped and killed by letting Chloe Lane (Nadia Bjorlin) take care of Holly really torqued Sami off, and Days of Our Lives viewers know Sami is a bull in a china shop when she gets started, and won’t finish till “Nicole” is emotionally in pieces worse than Eric, if Sami can accomplish it!

Days of Our Lives Spoilers: Gabi & Stefan Share A Romantic Night Together! Will She Marry Him And Take Him For Everything He Is Worth?

The Days of Our Lives summer spoiler promo from last week shows quite a fight between Sami and FakeNicole in the Brady Pub; Sami will slap her so hard she’s nearly knocked off her feet, and Days of Our Lives viewers can well imagine the “words” exchanged between the two women; some “words” which in the former days of television may have been “bleeped out”!

There are sure to be choice words, names, and accusations hurled verbally, and it’s not for sure which part of the fight was on the promo, whether it’s in the middle, or Sami just descends upon fakeNicole out of nowhere with a wallop, and explanations not given ahead of time!

In the latest #DAYS, Will continues to fight for his life as his family rallies around him.https://t.co/ZsCmioRrzb pic.twitter.com/OzJ78Y2xa7

DOOL Spoilers: Who Will Break Up The Cat Fight

That would be Sami-like, as witnessed by Days of Our Lives viewers who saw her father Roman Brady (Josh Taylor) have to physically restrain her from “rushing up” her aunt Kayla Johnson (Mary Beth Evans), half-brother Rex Brady (Kyle Lowder) and Sarah Horton (Linsey Godfrey) to complete the antidote to save her and Lucas Horton’s (Bryan Dattilo) son Will Horton’s (Chandler Massey) life in a recent episode!

Days of Our Lives viewers have to wonder who in Brady’s Pub will break up this cat fight?! Claws are out, and hisses to be heard between those two.