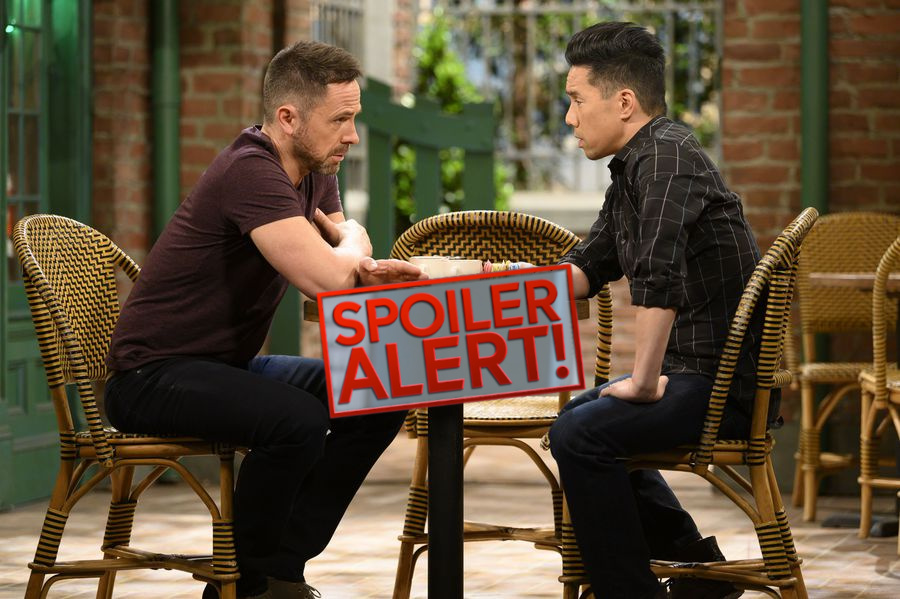 Monday, Lucas Jones (Ryan Carnes) confides the whole Shiloh Archer (Coby Ryan McLaughlin) custody mess in his mother, Bobbie Spencer (Jaclyn Zeman) and that his and his husband Brad Cooper’s (Parry Shen) adoption of baby Wiley Cooper-Jones (Eric and Theodore) could fall apart and they could lose the baby; as General Hospital viewers know, Lucas doesn’t know the half of it! Meanwhile, Jasper Jacks (Ingo Rademacher) offers his daughter Josslyn Jacks (Eden McCoy) a change of pace, possibly bringing her to the Crimson office for the day. Joss is not happy to see a certain female there, however!

Tuesday, Detective Harrison Chase (Josh Swickard) makes an unlikely arrest! Will this be one of the conspirators who tricked Ryan Chamberlain (Jon Lindstrom) out of his kidney, or might it even be his own girlfriend, Willow Tate (Katelyn MacMullen)? As General Hospital viewers will recall, she was very late for family court due to parents in her schoolroom, and her attorney Diane Miller (Carolyn Hennesy) was frantic!

General Hospital Spoilers: Ava Freaking, Afraid Jax Will Dig Up Dirt On Her and Put in Crimson

Could Shiloh have put through a frame of Willow for killing her father, Douglas Miller? Elsewhere, Kim Nero (Tamara Braun), desperate to fill the Oscar Nero Quartermaine (Garren Lake Stitt) shaped hole in her heart, gets mixed signals, likely from Oscar’s father, Drew Cain (Billy Miller). Yes, he cares for her and has some feelings, but will he be ready to try and make a new little Oscar with her?

Wednesday, Curtis Ashford (Donnell Turner) and Sam McCall (Kelly Monaco) catch up. The former private investigator partners have not worked together or came in contact with each other much since before the terrible accident in which Curtis’ wife, Jordan Ashford (Briana Nicole Henry) was severely injured. Will Curtis ask Sam, who’s known Jax for decades and was involved with him for a short time, some inside info about him? Also on Wednesday, Sam’s birth father, Julian Jerome (William DeVry) continues to vow to protect his family, including and especially baby Wiley from Shiloh!

Can Willow make it through the last day of school without incident? Click to watch today's dramatic, new #GH – RIGHT NOW: https://t.co/EG1DH7jai6

Thursday, Sam steps in to help Lucas, and this will likely be about the custody case over Wiley as well; it’s possible that Sam and Julian may work together again to try and destroy or alter more paper trail to protect Wiley from being discovered as Shiloh and Willow’s baby; of course General Hospital viewers know the truth, as does Brad, but Brad’s not telling! Meanwhile, Kim makes a fateful decision; will she seek comfort from Shiloh either through Dawn of Day or a particular type of comfort from Shiloh himself? Kim’s not thinking straight if she’s that desperate to have a baby; as an OB/GYN she should know where the nearest sperm bank is!

Friday, Michael Corinthos (Chad Duell) will visit Willow; but will it be in jail or somewhere else? Will Michael be able to help prove it’s a frame-up and get her released if that is indeed what has happened? Willow blamed herself for her father’s death but she certainly didn’t cause it directly! Finally, Kim invites an unlikely guest to her apartment as Shiloh is summoned for a visit!