Days of Our Lives Spoilers: Sami And Nicole Catfight Erupts – Will She Pull Kristen’s Mask Off 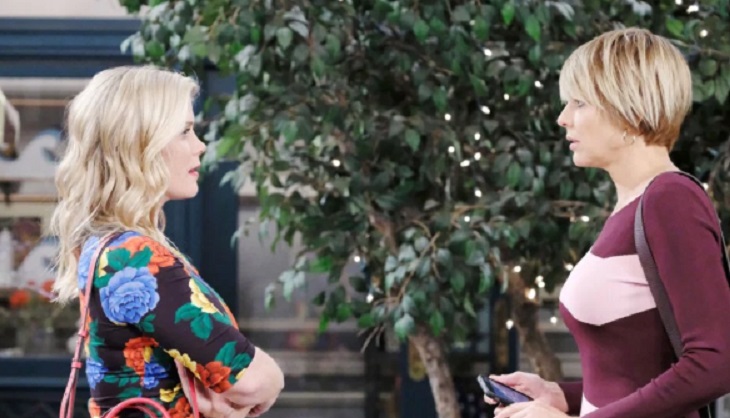 Days of Our Lives spoilers tease that Sami Brady DiMera (Alison Sweeney) will come very close to tearing “Fakeole’s” (Stacy Haiduk) false face right off of her when she and “Nicole Walker” (Adrienne Zucker) get into a catfight at Brady’s Pub in Monday’s episode of Days of Our Lives!

Sami told her brother Eric Brady (Greg Vaughan) that he should forget about Nicole and pursue Sarah Horton (Linsey Godfrey) instead, in spite of her being engaged to their half-brother Rex Brady (Kyle Lowder). Eric of course resisted the thought and said he and Sarah had decided to try to kill their feelings for each other when “Nicole” showed up on Eric’s doorstep. Sami then said she had to catch a flight, but as Days of Our Lives viewers know, Sami wasn’t going to leave town without tearing into Nicole for hurting Eric so badly!

Days of Our Lives viewers saw a piece of the action between Sami and “Nicole” in the summer promo released by Days of Our Lives a couple of weeks ago, and that is one fierce fight! It looks like Sami gives “Nicole” such a wallop right in the face that it nearly knocks her off her feet; and just maybe loosens the mask or the wig a little bit too, so she has to make a quick exit so as not to be recognized as Kristen DiMera (Stacy Haiduk)!

This #PrideMonth, @ChandlerMassey reflects on Will's place as an LGBT character in Daytime. @MrRobertScott and @victoriakonefal also comment on the plan to expose Claire. #DAYS

Don't miss the latest episode of Inside Salem! https://t.co/9vlZu6fkQB pic.twitter.com/cBQfgGe2Qg

The two women, meaning Sami and Nicole, have had issues with each other going back for years to begin with, mostly over interest in the same men, so they have been romantic rivals. Both were married to Lucas Horton (Bryan Dattilo) and EJ DiMera (James Scott), with Sami still being married to EJ.

Sami was also a sister in law of Nicole for a time when she was married to Nicole’s half-brother Brandon Walker (Matt Cedeno). EJ and Kristen are half-siblings, making Sami and Kristen sisters-in-law; EJ is alive, but has continuing health problems possibly due to another serum of Dr. Wilhelm Rolf (William Utay) that Kristen had been instructed to inject him with several years ago by Stefano DiMera (Joe Mascolo).

But at least he’s alive, and Kristen told Sami where to find him, which of course was the warehouse in Nashville that blew up. Would Sami fight even more fiercely if she knew it was Kristen she was fighting instead of Nicole? Time might tell the tale.