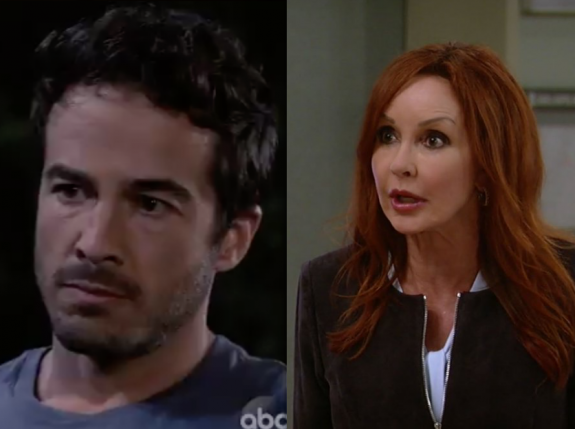 This will probably be prompted by Carly Corinthos (Laura Wright) since Monday’s General Hospital previews show her confronting his partner Brad Cooper (Parry Shen) about he and Lucas not keeping Grandma Bobbie updated on the custody situation surrounding Wiley Cooper-Jones (Eric and Theodore), with Bobbie present in the room.

General Hospital Spoilers: Willow’s Hearing Starts Without Her – Shiloh Gets The Upper-hand

As General Hospital viewers know, Wiley is at the center of a dangerous situation where the adoption by Brad and Lucas could fall through and Shiloh Archer (Coby Ryan McLaughlin) could potentially have it invalidated because he was not informed by the birth mother, Willow Tait (Katelyn MacMullen) that there even was a baby when she put him up for adoption, and then he can push for custody!

As General Hospital viewers also know, the Wiley that is nearly a year old isn’t Wiley, he’s Jonah Corinthos, and when Brad went to Pentonville to update his birth mother, Nelle Benson (Chloe Lanier) with what was going on, she bragged that she might be up for parole and wanted an active role in Wiley/Jonah’s life!

Lucas, of course, doesn’t know anything about the baby switch but he does know that the original birth parents are Willow and Shiloh and that the adoption is in danger of being invalidated, and he knows how dangerous Shiloh is as well! So Lucas will update his mother on the problems he and Brad may be facing with their adoption of baby Wiley.

Bobbie’s been through some major trauma in her life, and she is a pretty tough gal, but other General Hospital spoilers for Tuesday say she will collapse, or at least faint; whether it’s related to the potential adoption problems Lucas tells her about or not or she develops a sudden health issue is hard to say at this point, although it is possible it is such a shock that it literally knocks her off her feet!