General Hospital Spoilers & Recap Monday, June 24: The Judge Sides With Shiloh – Lulu Has A Solution For Liz And Franco 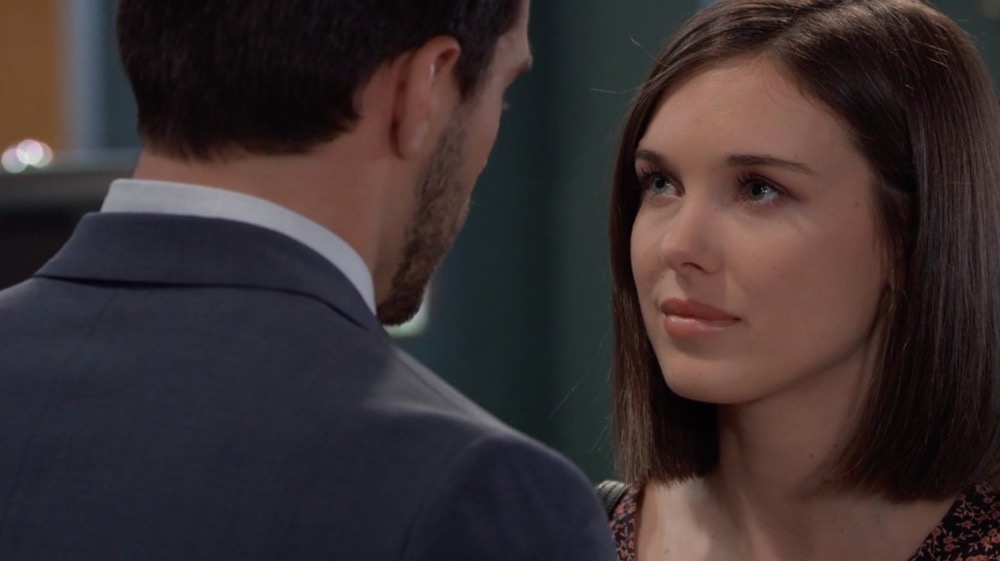 Maxie Jones And Jocelyn Jacks Give Ava An Idea

Maxie tells Ava what they want the cover to say, Ava disagrees. Ava gets a text reminder and tells Maxie about it. Maxie offers to let Ava reschedule. Ava picks a dress and goes to try it on for the photo shoot. Jocelyn Jacks (Eden McCoy) and Maxie talk about the séance and Ava overhear. Jocelyn tells Maxie about the ripples in the water, and she believes it was Shiloh. Jocelyn says it felt like Oscar was ok and gave them all closure.

General Hospital’s Jasper Jacks (Ingo Rademacher) joins Curtis Ashford (Donnell Turner), and they finalize plans on Curtis’ job. Jocelyn joins Jax and tells him about their house guest. Jax asks Jocelyn to move in with him; she is happy with Carly Corinthos (Laura Wright) and Sonny Corinthos (Maurice Benard). Jax takes Jocelyn to the Crimson office, and she’s furious to see Ava there. Jax wants Jocelyn to have a summer internship at Crimson. Jocelyn thinks Jax should have asked her first. Nina and Valentin arrive, Jax tells Nina he hired Curtis as head of security. Nina is shocked that Curtis took a job at Aurora but loved working with him.

General Hospital’s Jordan Ashford (Briana Nicole Henry) stops by the police station and tells them Mac Scorpio (John J.York) is taking over today. Harrison Chase (Josh Swickard) asks if Jordan has a problem with Mac taking over. Curtis arrives at the police station demanding to know what Jordan is doing. Curtis is very upset with Jordan for coming to the PCPD and chastising her. Jordan apologizes for leaving the hospital without him. Jordan doesn’t think she needs to take a break at all. Curtis tells Jordan that Mac has this covered and tells her he took that job working for Drew Cain (Billy Miller). Curtis tells Jordan how he is working for Valentin Cassadine (James Patrick Stuart) to get information on Jax. Jordan asks Curtis how he thinks Drew will feel about this.

Jordan's eager to get back to work… for more than one reason. Can Curtis convince her to take it easy until she's fully recovered?
Tune into a dramatic, new #GH – STARTING NOW on ABC! @Bri_Nic_Henry pic.twitter.com/0IR8gLuoRh

Michael Corinthos Volunteers To Get Answers

All Information On Willow Tait’s Baby Must Be Revealed

General Hospital’s Diane Miller (Carolyn Hennesy) is waiting for Willow at the courthouse. The judge asks where Willow is and plans to move on with the hearing with or without her. Diane calls Chase and sends him to get Willow. Diane asks for a recess until Willow arrives. Shiloh suggests Willow is leaving town with his child as they speak. Zarah Amir (Maysoon Zayid), Shiloh’s attorney mentions records that were illegally obtained from the hospital about Willow’s child. The judge finds in favor of Shiloh. Willow is ordered to turn over all information about the baby she gave up for adoption.

Is Michael ready to step into Jason's shoes? If they want to find the final nail in Shiloh's coffin, he doesn't have a choice.#GH is brand-new and STARTS NOW on ABC! @duelly87 @1SteveBurton pic.twitter.com/AptSnAKLac

General Hospital’s Willow tries to leave her room, Liz Baldwin (Rebecca Herbst) and Lulu Falconeri (Emme Rylan) detain her. The principal walks in and needs to speak to Willow about her future at the school. The principal invites Willow back next year to teach. Liz and Lulu question why Willow didn’t stick around but realize it must have been important. Franco gets a call canceling the reception hall. Lulu offers the Haunted Star, but Liz doesn’t think it’s a good idea. Franco says the memories from the Haunted Star won’t bother him. Franco leaves the final decision up to Liz.

General Hospital’s Carly shows up at the hospital to pick up vitamins and bumps into Bobbie Spencer (Jackie Zeman) who tells her that Brad Cooper (Parry Shen) is at the hospital and needs attention. Bobbie thinks that Brad is a hypochondriac. Carly realizes that Bobbie hasn’t been told anything about the situation with the baby. Lucas Jones (Ryan Carnes) arrives and goes to Brad’s room. Bobbie demands answers, Lucas tells her he asked for Julian Jerome’s (William DeVry) help. Carly and Bobbie try to explain that the judge could unseal the adoption records. Bobbie leaves telling Carly she will be back shortly. Bobbie goes to Charlie’s to confront Julian. Bobbie slaps Julian when he says Brad and Lucas are happy.