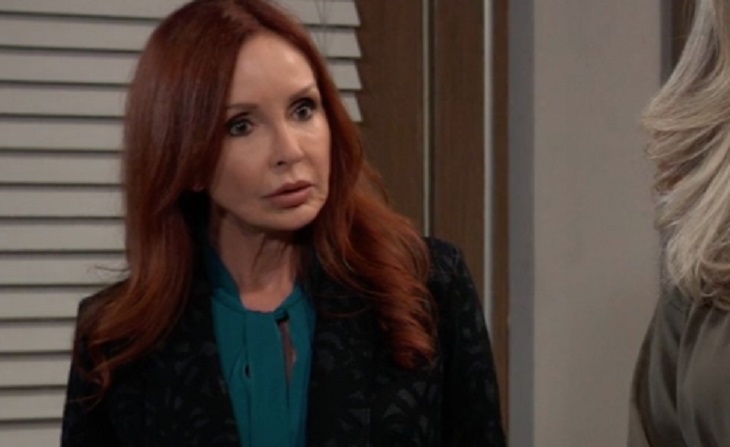 “General Hospital” spoilers for Tuesday, June 25, tease that Kim Nero (Tamara Braun) will need Drew Cain’s (Billy Miller) help. She’ll push him to keep Oscar Nero Quartermaine (Garren Stitt) alive, but there’ll be some confusion between them. Drew will give Kim the wrong idea, so she’ll think they’re all set to make another little sibling for Oscar.

Kim will lock lips with Drew and hope things will escalate. However, Drew will set the record straight soon enough. There’s no way he can get behind a decision like this when Kim’s so fragile. Over with Bobbie Spencer (Jacklyn Zeman), she’ll continue ripping into Julian Jerome (William deVry). Bobbie will feel like Julian may have just cost all of them “Wiley Cooper-Jones.”

Just in case Julian didn’t get the message from that slap, Bobbie will fume about Julian’s stupidity. She’ll insist that getting rid of the adoption records was the wrong call. That could very well be true since Willow Tait (Katelyn MacMullen) was just ordered to hand over all info regarding the child she gave up for adoption.

Bobbie will end up collapsing before the episode’s over, so it seems the stress will be too much for her. Meanwhile, Willow will become enraged in the courtroom. Her outburst could cost her big time, especially if she refuses to obey orders. Will Willow be held in contempt of court? “General Hospital” spoilers say Harrison Chase (Josh Swickard) will make an arrest he never saw coming on Tuesday, so Willow may fit the bill.

Elsewhere, GH’s teen scene will gather. Dev (Ashton Arbab) will be talking to Josslyn Jacks (Eden McCoy) when Cameron Webber (William Lipton) arrives. Cam will grill Joss about the robbery and Dev’s involvement, so she’ll have to decide how much to reveal. Next, Sonny Corinthos (Maurice Benard) will have high hopes. He’ll tell Carly Corinthos (Laura Wright) that he thinks he has a way for Dev to stick around.

Sonny certainly doesn’t want Dev to be deported and face the possibility of death in Turkey. He plans to let Dev pose as his cousin this summer, but perhaps he’ll find a more legal solution. In Beechers Corners, Jason Morgan (Steve Burton) may pitch in with Michael Corinthos’ (Chad Duell) grilling session. Carol Lockhart will undoubtedly be wary of saying too much, but it seems Jason will promise protection.

General Hospital Spoilers: Willow’s Hearing Starts Without Her – Shiloh Gets The Upper-hand

“General Hospital” spoilers say Carol will spill some shockers sooner or later, so Jason and Michael will get one step closer to their goal of bringing down Shiloh Archer (Coby Ryan McLaughlin). We’ll give you updates as other news and rumors emerge.