Young And The Restless Last Week In Review: Adam Gives Kevin An Assignment – Devon Has A Panic Attack 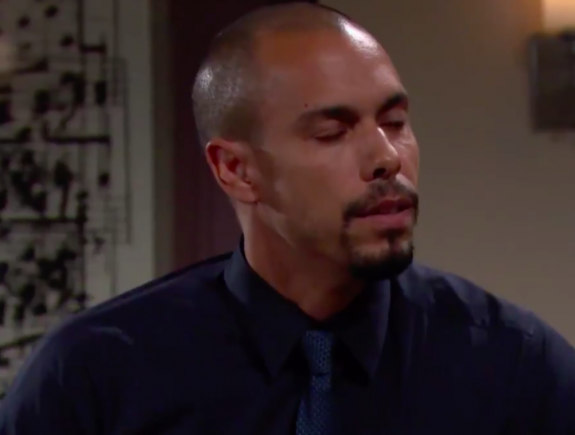 Last week on The Young And The Restless (Y&R) Adam Newman (Mark Grossman) continued to play Kevin Fisher (Greg Rikaart) like a puppet on a string.

Over coffee at Y&R’s Crimson Lights, Adam informed Kevin he would let him see Chloe Mitchell (Elizabeth Hendrickson) if he found out how Victoria Newman (Amelia Heinle) and Nick Newman (Joshua Morrow) were planning to retaliate against him.

Kevin informed him he’s no James Bond – he’s more like Q, the character who works alone in a room.

“That’s kind of sad,” Adam said. “You need to work on your people skills.” Kevin looked like he was going to blow a gasket as he told Adam: “I hate you so hard.”

The exchanges between Adam and Kevin have been highly entertaining on Y&R lately. These two have such great chemistry together – I just keep waiting for them to kiss! I hope we see many more scenes with Grossman and Rikaart in the weeks to come.

The Young And The Restless Spoilers: Kevin And Chloe Reunited – Genoa City Shocked That Chloe’s Alive?

Meanwhile, Victor Newman (Eric Braeden) finally handed the reigns of Newman Enterprises over to Victoria. Watching her excitement as she hugged her father was a little disheartening. When is Victoria going to stop needing her daddy’s approval?

At Y&R’s Society, Devon Hamilton (Bryton James) lashed out at Nate Hastings (Sean Dominic). He almost had steam coming out of his ears when he learned Nate had sold Neil Winters’ (Kristoff St. John) condo to none other than Adam.

Earlier in the day, he had berated his sister Ana Hamilton (Loren Lott), and by the time he had returned from a dedication ceremony to his late father, he was emotionally spent. He thought he saw Hilary Curtis’ (Mishael Morgan) ghost walk in and he had another panic attack. It had actually been Elena Dawson (Brytni Sarpy) entering his condo and she rushed to his side.

Y&R Spoilers: Phyllis Summers Is In Adam Newmans New Place Waiting For Him

Devon’s new neighbor Adam had a flashback to his former wife Chelsea Newman (Melissa Claire Egan) and his son Connor, as he turned the key in his door. And he wasn’t walking into an empty condo – Phyllis Summers (Michelle Stafford) was already inside, waiting for him.

“Long time no see,” she said. Phyllis believes Adam was responsible for her kidnapping and she tells him she’s discovered his connection to a member of the Chancellor family. And things just got a whole lot more interesting.

Do you think Adam will finally let Kevin see Chloe? Let us know in our comments section.