Days of Our Lives Spoilers And Recap Tuesday, June 25 – Rex And Sarah Get Married; Kate Follows Xander To Kristen’s Room 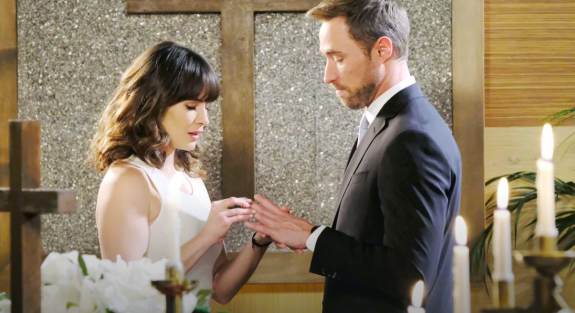 Days of Our Lives (DOOL) recap for Tuesday, June 25, 2019, reveals Jack Deveraux (Matthew Ashford) is having another rally, and Jennifer Horton (Melissa Reeves) demands to know when he is going to drop the charges against J.J. Deveraux (Casey Moss).

Jennifer tells Jack that the diary has shown up and wants him to get his memory back. Jack says he has been living without memories for a long time now and doesn’t miss it at all. Jennifer goes to the hospital and speaks to Kayla Johnson (Mary Beth Evans) about Will’s recovery and the serum.

Jennifer tells Kayla that Jack doesn’t want to remember his past. Kayla disagrees with Jennifer; Jack is settling. Jennifer thought she was making progress with Jack. Kayla tells Jennifer to be patient; Jack will come back to her. Jack goes to the hospital and wants to ask questions about the diary.

Days Of Our Lives Spoilers: Eve Donovan Asks Justin Kiriakis To Be D.A.

Jack comes into Eve’s office after being summoned. Eve tells Jack that Ben hired Justin and wants him to make Justin D.A. Justin doesn’t want to work for Jack. Justin demands to take Ben to be arraigned. Jack tells Eve that Jennifer told him that the diary had been found. Eve questions if Jack has changed his mind about wanting his memory back. Eve claims not to be abusing her power as police commissioner before heading to the courthouse. Jack looks at J.J.’s police file and sits down.

Days Of Our Lives Spoilers: Arianne Zucker Has Two Faces On DOOL – This Is Nicole She’s Always Wanted To Play!

Eric pronounces Rex and Sarah man and wife. Eric goes to the pub and tells Roman Brady (Josh Taylor) about the wedding. Eric tells Roman that Rex and Sarah didn’t want a big wedding. Roman knows Eric has feelings for Sarah. Eric wants everyone to give up hope that he and Nicole have a future together. Eric went to tell Sarah about his feelings but ended up marrying Sarah to Rex. Roman tells Eric he and Nicole will be back together soon and goes to make them a sandwich.

Days of Our Lives Xander Cook (Paul Telfer) is composing a note to Sarah when Maggie Kiriakis (Suzanne Rogers) walks in and questions what she overhears. Xander tells Maggie she needs to stop sneaking up on him. Xander tells Maggie he was having a debate whether to go through with something or not. Maggie finds it odd that Xander wants to date Sarah. Xander accuses Maggie of not being good enough for Sarah. Maggie questions Xander about giving Sarah the necklace.

Sarah walks in, and Xander gives her the necklace. Rex joins them, and Sarah says she and Rex got married. Kate arrives and finds out about the marriage and demands to know why no one was invited. Kate wants to throw a party for Rex and Sarah. Kate taunts Xander.

Xander claims not to understand why Kate is hostile to him. Xander wants Sarah to keep the necklace as a wedding gift. Xander leaves, and Kate follows. Xander arrives at the hotel and tells Kristen he killed Ted Laurant (Gilles Marini).

Days of Our Lives Kate Roberts (Lauren Koslow) is in Nicole Walker’s (Arianne Zucker) room at the Salem Inn. Kate questions Nicole about the red dress that Maggie claims to have seen Kristen Dimera (Stacy Haiduk) in the day of the funeral. Nicole makes jokes about Kate’s investigation.

Kate knows she is guilty of something. Kate and Nicole argue before she leaves the room. Kate vows to find out what Nicole is hiding. Kristen takes off the mask says Kate will never guess her secret in a million years. Kristen changes clothes and looks at Ted’s phone says he better be dead like the phone.