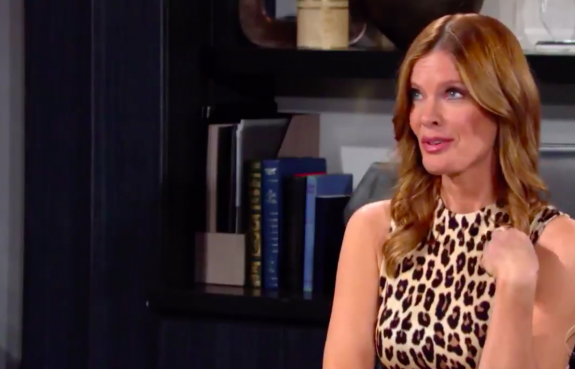 “The Young and the Restless” (YR) recap for Tuesday, June 25, 2019 reveals that Phyllis Summers (Michelle Stafford) arrives at Nick Newman’s (Joshua Morrow) house. He appears and asks, “What do you want?” She knows he was worried when she dropped off the grid.

He was only upset on Summer Newman’s (Hunter King) behalf and knows Phyllis helped Adam Newman (Mark Grossman) hack into Dark Horse’s servers so he could take his son. Phyllis would never do anything to Christian. Nick will never believe another word from her, and orders her out.

Kevin Fisher (Greg Rikaart) arrives at Adam Newman’s penthouse asking about Chloe Mitchell (Elizabeth Hendrickson). Adam has another task for him which is finding information that makes Nick Newman look like an unfit parent. Kevin won’t help him take Christian after ripping Delia Abbott (Sophie Pollono) from Chloe. “You really are a bastard.” Adam is sorry about Delia but there are limits to his patience. Kevin will see what he can find out.

Adam hands him passwords to Nick’s business accounts. Later, Phyllis Summers arrives and wonders if he’s at all worried about the information she has on him and Chance Chancellor. Adam blithely says Vegas is the past. She thinks he’s bluffing. Adam prefers her as an ally and mentions his Dark Horse offer. Phyllis is taking the job, but warns her edge cuts both ways.

At home, Y&R’s Ana Hamilton (Loren Lott) is worried about Devon Hamilton (Bryton James) and she knows about his panic attack. He tries to downplay it and reveals he stopped taking his medication and it was numbing all of his feelings. Ana argues his doctor put them on him for a reason and reminds him he’s lost Neil Winters (Kristoff St. John) and his wife. Devon denies Hilary Curtis (Mishael Morgan) had anything to do with the panic attack and goes upstairs.

Victor fills him in on the possible change to the new drug and wants Nick’s advice. Nick thinks it’s his best bet to beat the disease. Victor reveals the side effects include diminished mental capacity. Nikki and Nick think he’ll beat the odds if he can handle not being in control for a bit. Victor decides he’ll do it.

Young And The Restless Spoilers: At Dark Horse Kevin Fisher Accesses The Servers

At Crimson Lights, Kevin Fisher updates Michael Baldwin (Christian LeBlanc) that Adam Newman still won’t let him see Chloe Mitchell. He found something bad and Adam can hurt a lot of people with it. Michael reveals he warned Adam and now he’ll make good on it. He tells Kevin to stall Adam while he makes a plan.

Later, Y&R’s Nate Hastings arrives and runs into Adam Newman, who asks how Victor’s doing. Nate can’t discuss it and heads to the patio where he meets Ana Hamilton and she’s worried about Devon Hamilton. She fills him in on Devon stopping his meds and mentioning Hilary Curtis to Elena Dawson (Brytni Sarpy). She complains he has Elena living in a shrine to Hilary.

Elena Dawson arrives at home and tells Devon Hamilton her job’s going well. He wants to plan a vacation, but she insists they talk about what happened last night. Devon’s embarrassed. Elena says, “Hilary. She’s right here with us.” She asks him to be honest, but he takes a call and says he’s fine. After, Elena gets out Hilary Curtis’ dresses and reiterates there’s another person in their relationship. She feels they shouldn’t have had sex and he’s not over Hilary. Elena respects that and wants him to respect her feelings too.

Y&R’s Michael Baldwin’s surprised to see Phyllis Summers at Dark Horse. She claims she was away recharging her batteries and reveals Adam Newman hired her to run the company. Michael wonders if she wants congratulation on reaching a new low. She thanks him for his support. Michael can’t believe she’s doing this to Nick Newman. Phyllis replies that Nick’s treated her like garbage – she’s taken a hard look at all of this and likes the view.

Victor Newman’s hitting the heavy bag at home when Adam Newman stops by to see how he’s doing. Victor keeps boxing and says he’s stable. Adam thinks it was the right move appointing Victoria Newman (Amelia Heinle). Victor chuckles at his seeming show of concern for the family. Adam warns the others will fall apart if he dies and that he’s done fine without him for most of his life. Victor recalls Adam’s always had someone else do the heavy lifting for him and mentions Chance Chancellor. Adam punches the heavy bag and leaves. Victor chuckles he has a lot to learn. Once alone, Victor looks weak.

At Chancellor Park, Y&R’s Nikki Newman tells Nick Newman it’s nice to see him reconnecting with Victor Newman. Nick’s afraid Victor’s getting his affairs in order. Nikki vows it’s time for her to be his father’s protector. And that’s a wrap.