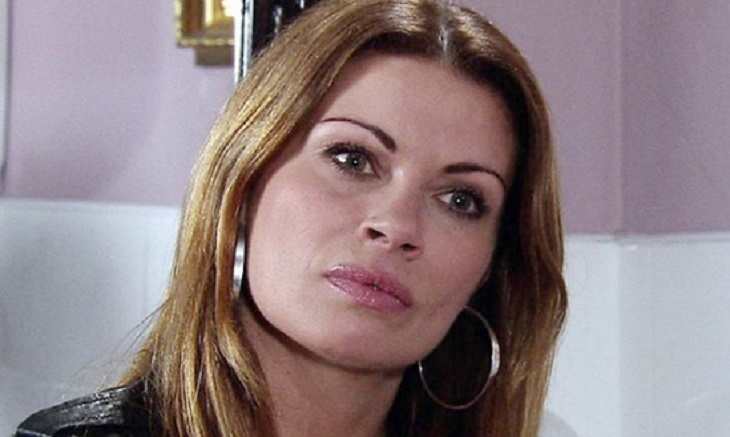 Coronation Street spoilers tease that Carla Connor (Alison King) will be making her return to Weatherfield after she has spent the last several weeks at a treatment facility for her mental breakdown. Carla just hasn’t been the same ever since that devastating roof collage that killed Rana Habeeb (Bhavna Limbachia) on her wedding day.

As many fans know, Carla just hasn’t been her old self after suffering from a series of mental breakdowns. She’s been dealing with an ongoing battle with psychosis and has even had flashbacks of Rana in a red coat as she is having a hard time distinguishing what is real and what isn’t real. That’s why, with Peter Barlow (Chris Gascoyne) by her side, she sought the treatment that she needed in order to get these awful and bizarre thoughts out of her head.

Well now it looks like the slightly new and improved Carla is coming back home. Coronation Street spoilers tease that Carla will be returning home to the cobblers on Wednesday, July 3 with a supportive by also very nervous Peter with her.

One of the reasons why Peter is so worried is because he thinks that Carla is coming home a bit too soon. He is also panicking that she will take on too much and that she might be jeopardizing her recovery. Of course, it wasn’t Carla who caused the roof to collapse during that one fatal day that changed everything. It was actually Gary Windass (Mikey North) who did it and it will only be a matter of time before the real truth comes out.

One source told Britain’s The Sun, “It’s going to be a long road to recovery for Carla after all she’s been through. She returns to Weatherfield terrified of the reaction she will get and is desperate to try and make up for everything that has happened. She blames herself for the state the factory is in and takes drastic action to win back the trust of her team.”

Needless to say, fans will have to tune in to find out what’s in store. Will Carla snap again?