Days of Our Lives Spoilers: Jack Deveraux Risks It All To Get His Memories And Old Life Back? 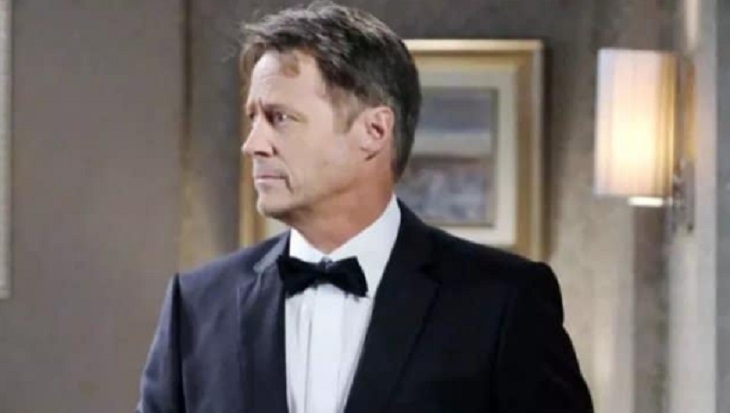 His ex-wife, Jennifer Horton (Melissa Reeves) will have made him aware that Rolf’s diary was found and that Will Horton’s (Chandler Massey) life was saved because of finding the diary. She will also push him very strongly to take some of the amnesia serum. Jack won’t tell her yes right off, partially because he’s been so programmed by Eve Deveraux (Kassie DePaiva) not to trust Jennifer.

However, he is coming to realize that Eve is controlling him, and he doesn’t like it. He wants to be his own man, and make his own decisions, not be Eve’s minion! This is a good sign that Jack’s personality is coming back, if not his conscious memories, although as Days of Our Lives viewers will recall, he’s had flashes here and there when Jennifer has either conked him on the head or boxes fell on it!

Days Of Our Lives Spoilers: Claire Makes A Confession to Shawn – Will He Turn Her in?

Whether this has been a coincidence or a connection between the head blows and Jack getting flashes of memory would be an interesting research study for neurologists but probably not one that would ever be funded!

Jack will ask Kayla for one, if he decided to take the serum would he be able to, and secondly, he would ask about the safety of it, considering that Will apparently developed a brain tumor that nearly killed him as a side effect! It is possible, as other Days of Our Lives spoilers tease, that what happened to Will was a side effect related to an overdose of the serum rather than the serum itself, but it has not yet been tested enough to find out for sure.

That is what Kayla will tell him, that legally she can not give him the serum because it has not been tested and legally approved for use, and it could take years of trials. The antidote developed from it was used on Will because he would have died anyway, and they just basically lucked out that it worked to reduce the tumor and to save his life!

Then she will suggest Jack goes to talk to Will about the matter, because Will currently has the diary. Will can also tell him about his experiences with how the amnesia serum worked and that maybe Jack shouldn’t take too much at a time!