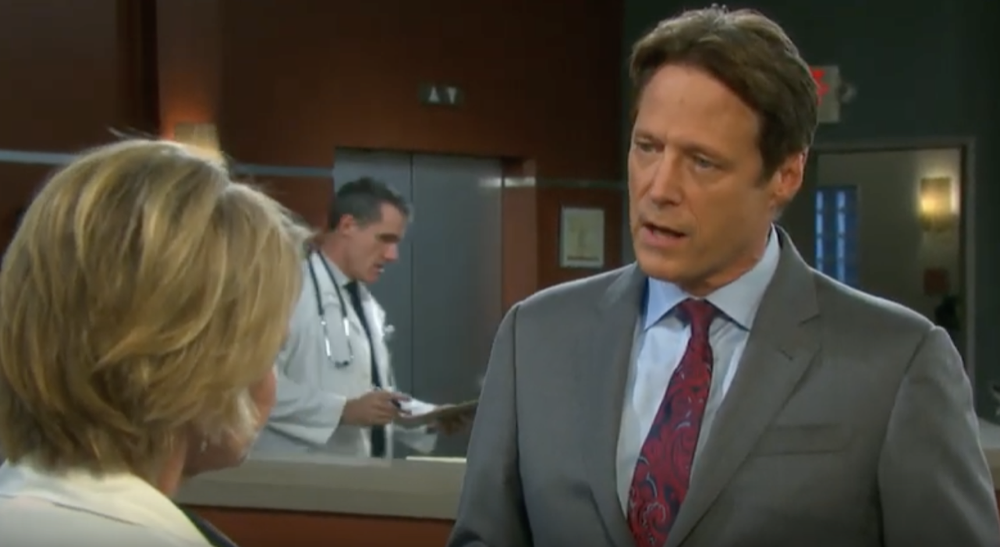 Kayla Johnson Tells Jack To Talk To Will Horton

Days of Our Lives Jack goes to the hospital and asks Kayla Johnson (Mary Beth Evans) how soon he can take the memory serum. Jack tries to use Steve Johnson (Stephen Nichols) to get Kayla to use the serum on him, she refuses. Jack promises not to rat Kayla out to the FDA. Kayla says Eve would in a heartbeat. Kayla says the diary belongs to Will Horton (Chandler Massey) and he could give him the original formula.

Kayla warns Jack that he’s walking into unknown territory. Jack gets a call from Eve and asks Kayla to keep this conversation between them. Jack isn’t sure he wants his memory back. Jack wants to know his kids, Kayla asks about Jennifer. Kayla asks if Jack is feeling pulled toward Jennifer. Kayla tells Jack she has to stay quiet. Jack goes to the police station and tells Eve he just needed some air. Eve goes to get Jack coffee.

Days of Our Lives Eli Grant (Lamon Archey) is at working looking longingly at Lani Price’s (Sal Stowers) photo. Eli starts to head to the Salem Inn, but Eve stops him. Eve wants Eli to stay on the Ben Weston (Robert Scott Wilson) case. Eve calls to warn Xander about the call. Xander tells Kristen they have company and heads toward the door.

Lani arrives and wants to talk to Eli. Eli and Lani go to the park to talk. Lani tells Eli he was right, and she was wrong. Lani couldn’t help herself when it came to David. Lani tells Eli she can’t keep pretending to be a mother to a baby that wasn’t hers. Lani can’t figure out how to say goodbye to their baby, Eli knows. Eli and Lani both want to get back together. Eli suggests they buy flowers for their son.

General Hospital’s Lani meets with Abe Carver (James Reynolds) who tells her about his new job at Dimera. Lani is going to try not to worry about Abe; he can’t promise the same. Lani tells Abe she was wrong about getting too attached to David. Lani has moved out of Rafe Hernandez’s (Galen Gering) house. Lani says it’s too bad she came to her sense after Eli walked out on her.

Abe encourages Lani to talk to Eli. Abe goes to the Dimera mansion and talks to Stefano Dimera’s (Joe Mascolo) photo. Stefan catches Abe talking to the portrait and tells Abe he thought he was the only one who did. Abe and Stefan talk about Lexi Carver (Renee Jones) ‘ and how he wishes he had met her. Stefan tells Abe to let Nicole Walker (Arianne Zucker) know she’s fired. Abe tells Stefan he can’t fire Nicole for missing one day of work. Abe wants to find out what is going on with Nicole first, Stefan agrees. Abe calls Nicole, who claims to have a bug.

In the latest #DAYS, Jennifer tells Jack that Dr. Rolf’s diary has been found, and she urges him to take the serum to get his memory back.https://t.co/ZsCmioRrzb pic.twitter.com/WOxMBSlRB1

Xander demands to know what Hope wanted. Kristen tells Xander that Ted’s phone is dead, and so is Ted. Xander opens the door, and Kate falls inside. Xander holds a gun on Kate and demands to know what she knows and who she has told. Kristen knocks Kate out and demands Xander shoot her. Xander tells Kristen they cannot fire a shot in the hotel without arousing suspicion; he will take care of Kate the way he did Ted. Xander throws Kate in the room with Ted, who tries to awaken her.