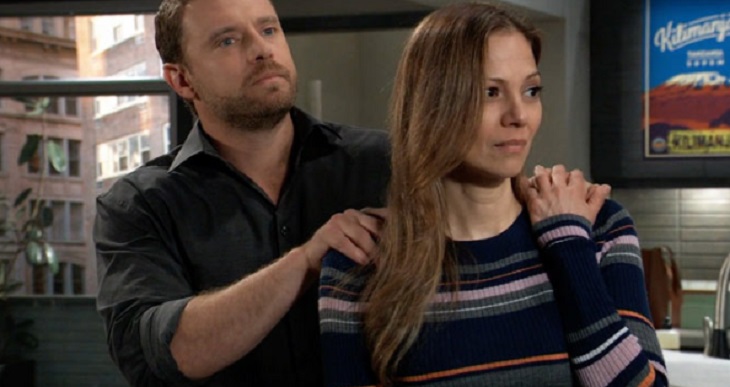 General Hospital spoilers tease that Kim Nero (Tamara Braun) and Drew Cain (Billy Miller) are about to get very close in the coming weeks. Yes, they are both mourning the death of their son Oscar Nero (Garren Stint). But there’s something else that might bring them even closer than ever before. Here’s what you need to know.

Right now Drew is one of the few people that Kim can count on. If there’s anyone who knows what she’s feeling, it’s definitely her ex. They even share a kiss with both of them realizing that they still have some feelings for one another, despite their checkered past. And for Kim, Oscar’s death has left a very huge hole in her heart and that’s why she’s looking for something or even someone to help her get through this heartbreaking period in her life.

General Hospital co-head writer Shelly Altman tells Soap Opera Digest in an interview, “The loss has certainly brought them closer. They shared a unique experience that neither of them can possibly share with another human being, so they have that in common. And they do care about one another.”

Shelly also points out that Kim has long nursed some feelings for her ex. She continued, “Going back to the beginning of her relationship with Julian, she frankly admitted then that she still had feelings for the Drew she once knew, and that became embodied in the Drew she knows now. She has a memory of feelings that Drew doesn’t have, so she does hold that with her.”

General Hospital Spoilers – Will Drew And Kim Get Back Together?

So, does this mean that there’s a chance Drew and Kim might get back together again? That might be the case. As a matter of fact, Drew makes a comment that leads Kim to believe that he may be thinking what she’s thinking. And that’s to conceive another child. Shelly says, “He is talking in a far more general sense, but Kim takes it literally.”

Again, Kim isn’t thinking very rational right now. Seeing how both of them are on two different pages, it will be interesting to see what happens next. Needless to say, fans will have to tune in!