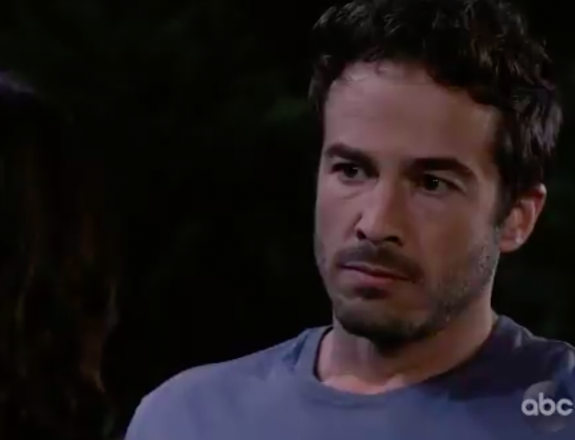 General Hospital spoilers tease that Lucas Jones (Ryan Carnes) will confirm his suspicions about something in Wednesday, June 26th’s General Hospital episode. General Hospital viewers will recall that his mother, Bobbie Spencer (Jacklyn Zeman) fainted in Tuesday’s episode, and Lucas may be confirming the cause of her fainting through medical tests he may have ordered.

Many different things could cause fainting, among them a sudden drop in blood pressure, low blood sugar, hyperventilation (breathing too fast), dehydration, standing in one position for too long, standing up too quickly, physical exertion in hot temperatures – which can cause one to become dehydrated – severe pain, and fear or other emotional trauma.

Bobbie could have been neglecting to eat and drink enough while working, and she is a General Hospital nurse, so she could have become dehydrated and hypoglycemic (low blood sugar) and nurses certainly are on their feet a lot unless they’re working the nurses station.

Lucas had been filling Bobbie in on the custody situation in Monday’s episode, talking to her about the possibility that Wiley Cooper-Jones’ (Eric and Theodore) adoption could be in danger of being invalidated because the birth father had not been notified of the pregnancy or the adoption plans, and now the birth father has become involved and is actively seeking custody.

Lucas probably filled her in on the identities of the birth parents, at least that of Shiloh Archer (Coby Ryan McLaughlin) and warned her about him. However, just finding out that information should not have caused Bobbie to faint or collapse unless there was an underlying physical condition or problem.

Of course, as people age they can develop health problems, and Bobbie will be 62 this year. Could General Hospital be getting ready to force Bobbie into an early retirement like the WSB did Robert Scorpio (Tristan Rogers) citing the fainting spell as it being time for her to retire?

Lucas could have found something serious as well, such as a blocked artery that Bobbie may require surgery on. It’s doubtful that GH powers that be would write another brain tumor storyline although that could certainly be a cause of fainting as well, but there has been nothing mentioned about Bobbie suffering a seizure.