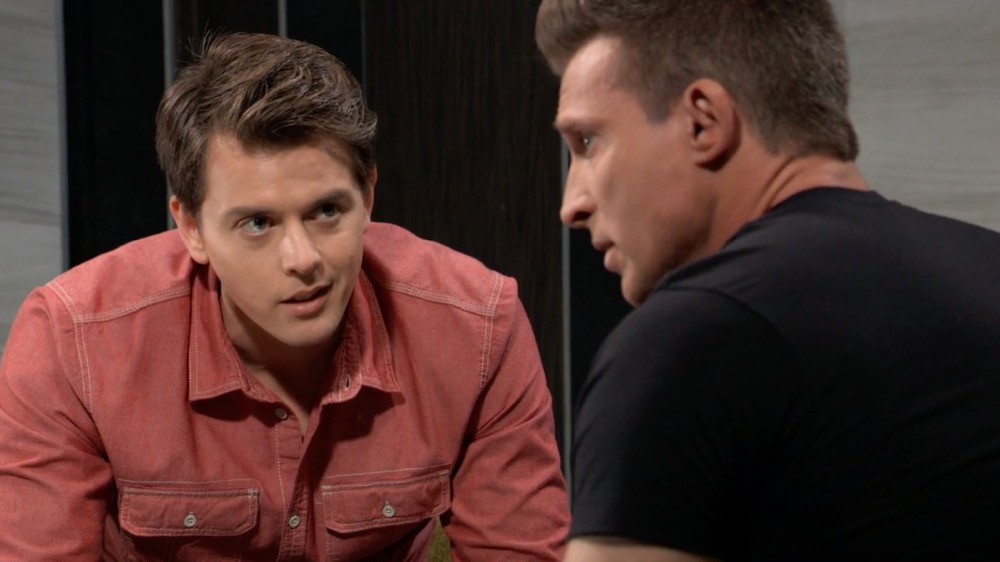 General Hospital spoilers tease that Michael Corinthos (Chad Duell) will come to the rescue of Jason Morgan (Steve Burton) in Thursday, June 27th’s episode of General Hospital. General Hospital viewers will recall in Monday and Tuesday’s episodes that Michael and Jason tag-teamed to look for some proof of Shiloh Archer’s (Coby Ryan McLaughlin) culpability in the suspected murder of Douglas Miller at the Beecher’s Corners Dawn of Day branch.

Jason could be recognized from his trip up there before and had some outstanding warrants with the Beecher’s Corners police, who are in Shiloh’s pocket, so Michael agreed to go in his place, but Jason is outside in a car recording everything. The assumption is that they are already in Beecher’s Corners Thursday, investigating, and possibly Jason is spotted in the car and recognized!

Michael and Jason are able to track down the possibly former “Dawnie”, Carol Lockhart (actor uncredited as of this writing) who took the fall for Shiloh and who supplied the drugs that Douglas Miller supposedly committed suicide within an overdose the night his daughter Willow Tait (Katelyn MacMullen), then known by her real name of Kali Miller, was supposed to meet him.

Instead, she was manipulated into standing her dad up and completing her initiation into the “Trust” at Dawn of Day, which of course culminated in her pregnancy. Carol was arrested for providing the drugs used on Douglas and agrees to help Michael and Jason after Jason promises she will not be hurt and she will be protected.

But Jason will find himself in need of rescue in Thursday’s episode, and Michael will have to get him out of whatever situation he has found himself in! General Hospital viewers should find that an interesting switch-up, considering Jason is usually the rescuer and doesn’t get himself into situations where he needs to be rescued!

Will Carol still be under Shiloh’s spell and call the police instead about Jason and possibly Michael as well, or will some other “Dawnie” or a Beecher’s Corners corrupt cop spot him and Michael has to provide a quick distraction so they can get away?