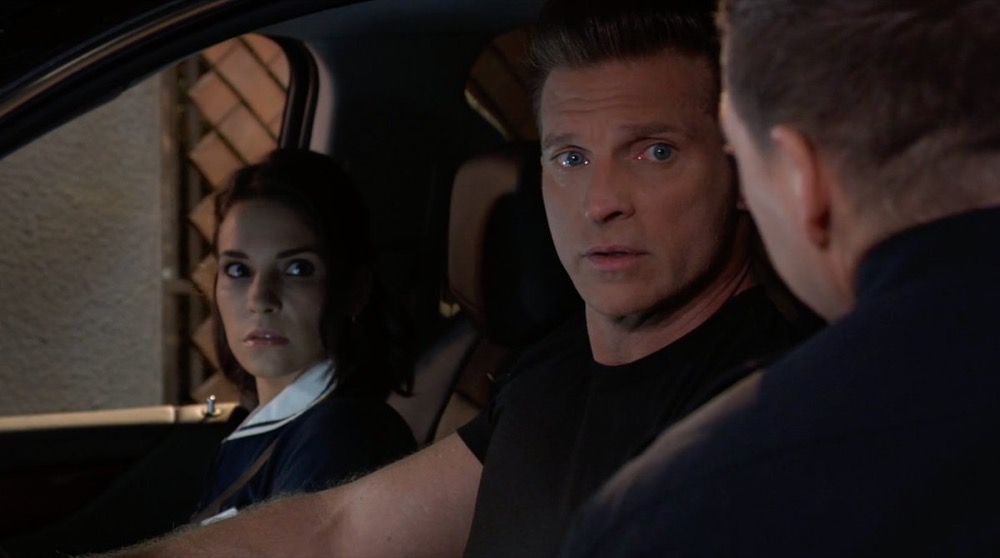 General Hospital (GH) recap for Wednesday, June 26, 2019, reveals Jason Morgan (Steve Burton) and Carol Lockhart (Many Musgraves) are getting into his car to leave when the cops show up.

Jason tells the cop he’s not in Beecher’s Corners. The cop wants a better look at the passenger and asks why Carol is in the car. The cop accuses Jason of trying to abduct Carol. The cop arrests Jason and refuses to let him make a phone call. Jason demands the cop call his lawyer immediately, or the arrest will be thrown out. Shiloh gets a call from the cop saying Jason is there.

General Hospital’s Alexis Davis (Nancy Lee Grahn) and Brad Cooper (Parry Shen) are at Charlie’s Pub when Diane Miller (Carolyn Hennesy) calls. Julian Jerome (William DeVry) questions what is going on with court. Alexis tells them that Willow Tait (Katelyn MacMullen) wouldn’t talk in court and was arrested. Alexis asks if the adoption records will be found when the judge orders them to be opened. Brad calls Molly Lansing-Davis (Haley Pullos) to take Wiley for a while. Alexis says it will take time to connect Willow to Wiley.

Brad says Lucas will not be ok with Willow setting in jail. Alexis urges Brad to tell the court that Wiley is the baby they are looking for to get ahead of the game. Alexis explains that Shiloh will eventually find the baby, but if it comes out that Lucas and Brad knew about the cover-up, they will lose what ground they have on Shiloh.

Alexis says Shiloh will have to take a DNA test to prove he is the father, Brad refuses. Alexis says the DNA test can only help them; Brad wants to run, she tells him no. Alexis sets up an appointment to go over things with Brad and Lucas. Alexis wants Julian to stop feeding into Brad’s panic. Alexis demands to know what Julian knows that she doesn’t.

General Hospital’s Lucas Jones (Ryan Carnes) arrives at the nurse’s desk to speak to Bobbie Spencer (Jackie Zeman). Bobbie asks Lucas if he has heard anything concerning Wiley Cooper-Jones (Theo and Erik Olson). Lucas pulls Bobbie into his office and informs her she has Type 2 diabetes. Bobbie argues with Lucas that the test results are wrong. Bobbie says she eats right and takes care of herself, and this should not be happening to her. Lucas reassures her. Lucas makes Bobbie goes over the risks of her disease before leaving. Brad comes to the hospital with Wiley to visit Lucas. Bobbie joins them and holds Wiley.

General Hospital’s Curtis Ashford (Donnell Turner) meets Sam McCall (Kelly Monaco) in the park and tells her he needs to end their partnership. Sam understands Curtis’ choice to take another job. Curtis asks what is going on with the DOD case, Sam tells him about the baby Shiloh believes is his. Curtis wants information on Jasper Jacks (Ingo Rademacher). Sam tells Curtis she was in a relationship with Jax at one time.

Sam says Jax can help Aurora, and ask Curtis why all the questions. Curtis wants to know what to expect at Aurora. Sam tells Curtis he can always ask her anything. Sam believes Curtis will prove his worth to Jax and Drew. Sam isn’t changing the business cards any time soon. Curtis calls Valentin Cassidine (James Patrick Stuart) and tells him he is taking the job at Aurora. Meanwhile, Shiloh approaches Sam as she tries to reach Jason.

Kim puts Drew in an uncomfortable situation… is there even a right way to respond? An emotional, new #GH STARTS NOW on ABC! @TamaraBraun pic.twitter.com/DtgRKylsjS

Drew tells Kim she is coming to him because Julian refused her. Kim says she was wrong to ask Julian to give her a baby; this is between the two of them. Kim keeps trying to talk Drew into creating this child. Kim tells Drew they can keep Oscar’s spirit alive by having his brother or sister. Kim tells Drew that Oscar wanted a family to live on without him. Kim tells Drew they don’t have to be together; there is another way.

Shiloh Archer’s Lawyer Has Him Figured Out

General Hospital’s Shiloh Archer (Coby Ryan McLaughlin) tells his lawyer that Willow has powerful friends. Shiloh tries to get his lawyer, Zara Amir (Maysoon Zayid) to lower her fee, she refuses. Zara tells Shiloh they will have to come back to court to prove why he deserves to have custody of that baby. Shiloh has no home or anything. Shiloh has an outburst which Zara tells him will only hurt him. Zara tells Shiloh to stop with the DOD propaganda and be honest. Zara knows that Shiloh wants Willow with the baby.