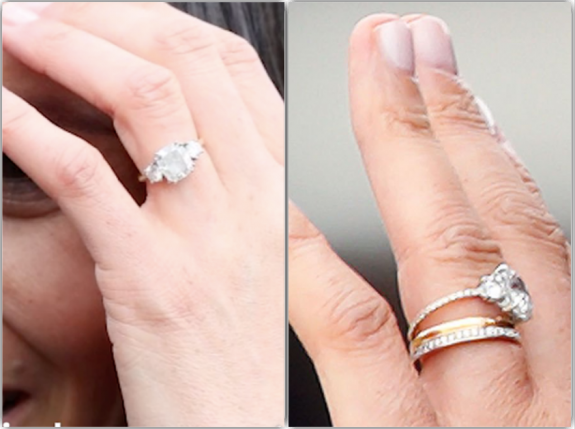 Royal watchers noticed that the Duchess of Sussex engagement ring has changed. Photos of Meghan Markle’s left ring finger taking during the Trooping of the Colors shows a slight difference.

Focused on the brand new shiny yellow gold and diamond eternity band, the subtle adjustment was not immediately noticed.

Meghan debuted her engagement ring for all the world to see in November 2017. A dazzler with a thick yellow gold band, a large middle diamond from Botswana and a smaller diamond flanking each side. The couple, all smiles, were quite pleased with the stunner. Young women around the world wanted a Meghan Ring.

Prince Harry revealed to the world that the large diamond was sourced from Botswana, a place special to the couple. The two smaller diamonds were chosen by the Duke of Sussex from the late Princess Diana’s personal collection.

Another piece of information Prince Harry told the world in the interview is that Meghan Markle prefers yellow gold. It is not uncommon for Royal engagement rings to be set in yellow gold.

Why the Duke of Sussex chose to reveal to the world that Meghan prefers yellow gold remains a bit of a mystery. Chalk it up to excitement from the newly engaged Prince Harry.

After endless and careful scrutiny, the change was noticed. Were the large diamond and two smaller diamonds reset in a thinner band of gold? It certainly appears that way. The question is, why?

One reason might be that Meghan’s fingers swelled excessively during the former actress’s pregnancy. Sadly, the engagement ring may have needed to be carefully cut from the Duchess of Sussex’s finger.

Esthetically speaking, the thinner band of the 3-stone matches the other two rings on Meghan left ring finger. Meghan’s thin wedding ring is made from Welsh gold, a tradition no Royal bride dare break. The eternity ring also has a thin band. The updated look of Meghan Markle’s engagement ring matches the others.

It should be noted that Kate Middleton’s engagement ring, Welsh gold wedding band and eternity ring all have thin bands. The Duchess of Cambridge’s sapphire and diamond, once worn by Princess Diana, needed no change.

Even if Kate Middleton wanted to change the band on the iconic sapphire engagement ring, the Duchess of Cambridge wouldn’t date.

Changing gifting pieces of Royal jewels is quite common. Kate Middleton changed Princess Diana’s sapphire and diamond earrings. The Duchess of Cambridge had the earrings fashioned into drop earrings.

Today marks the 70th anniversary of the modern Commonwealth – a family of 53 countries working together to promote democracy, protect human rights, regenerate the environment, and focus not on what makes us different – but rather what we have in ‘common.’ What unites us versus what divides us. Representing nearly one third of the world’s population, 60% of whom are under the age of 30, the Commonwealth also serves as a champion for youth empowerment, which is a key focus of The Duke and Duchess of Sussex. Her Majesty The Queen serves as patron of the @queens_commonwealth_trust, which Their Royal Highnesses proudly serve as President and Vice-President of. The Duke is also Commonwealth Youth Ambassador. Through The Duke and Duchess’ Commonwealth travels, they have worked with and supported young leaders on mobilizing youth engagement, and working towards a more unified future that spearheads progress, sustainability, optimism, and taking action. With that said, Mozambique, a member state of the Commonwealth, is currently enduring Cyclone Kenneth, the most destructive natural disaster the northern coast has ever experienced. On the heels of Cyclone Idai (where over 1000 people lost their lives) this cyclone will leave the people of Mozambique victim to catastrophic flooding, food insecurity, displacement, and obliteration of their homes and villages. If you’d like to help, please visit DEC.org.uk Photo credit: Chris Jackson & Samir Hussein