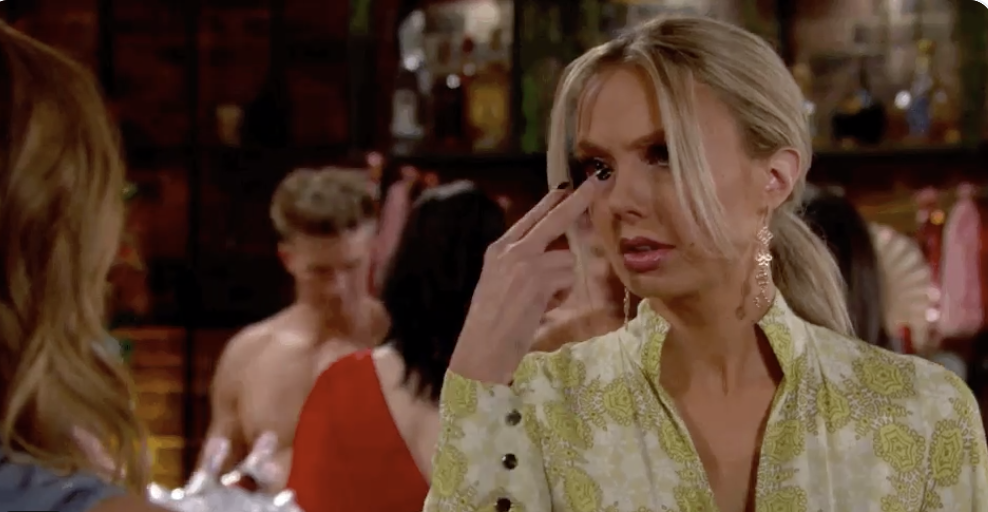 “The Young and the Restless” (YR) recap for Wednesday, June 26, 2019, reveals that over at Lola Rosales’ (Sasha Calle) apartment, Abby Newman (Melissa Ordway) promises to give her the best bridal shower anyone has ever had and advises her to wear a laidback, easy-going dress.

At Jabot, Summer Newman (Hunter King) disconnects from a call and overhears Kyle Abbott (Michael Mealor) and Jack Abbott (Peter Bergman) enthusing about the upcoming wedding and Lola’s bridal shower today. Later, Phyllis Summers (Michelle Stafford) enters Jack’s office with a gift basket and congratulates him on Jabot Collective. He asks why she’s really there. Phyllis was expecting him to be more gracious. They spar verbally about her knock-off site until he says he has a company to run. She replies, “So do I.”

Jack learns she’s CEO of Dark Horse. He snarls about her lack of loyalty to Nick Newman (Joshua Morrow) and Phyllis feigns shock before defending herself. Jack warns her about associating with Adam Newman (Mark Grossman). Phyllis says she came to tell him she forgives him. Lauren Fenmore Baldwin (Christian LeBlanc) enters and is aghast.

Phyllis says she forgives her too, then exits. Lauren asks, “What was that?” Jack has no idea. He rants about her being the new CEO at Dark Horse – it’s trouble with a capital T – as he searches Phyllis’ gift basket for a listening device. Lauren joins him to indulge in the wine and chocolate and asks about Mallory. Jack reveals she’s lovely company but isn’t sure it’s a ‘thing’. He’s grateful for Lauren’s friendship.

At home, Y&R’s Traci Abbott (Beth Maitland) continues her novel with Flynn telling Iris it’s the end of the line for her. He’s realized she wanted her husband to take the fall for his mistress’ murder. Iris turns angry when he says the cops are on the way, pulls out a gun and shoots him in the stomach, he returns the favor.

Traci smiles. Velma arrives and orders Flynn not to die on her now. He replies, “Not a chance. Who ya’ going to boss around if I’m not here?” Flynn and Velma kiss and Traci types, “The End.”

In their apartment, Kyle Abbott tells Lola Rosales she looks stunning then asks her opinion on flowers and the photographer. She trusts him. They canoodle until she has to go. Kyle pulls her down onto the sofa to make out some more. Later, Theo (Tyler Johnson) arrives to drink beer with Kyle since Summer Newman’s busy.

They discuss Kyle’s love life. He’s glad Summer got through their break-up, but Theo questions if she’s over him. He admits he likes her; she handled things better than he might have, but he’s not looking to settle down. Kyle reluctantly agrees to let Theo throw him a bachelor party. Later, Kyle texts Lola – he hopes she’s having fun but can’t wait to have her to himself.

The Young And The Restless Spoilers: Elizabeth Hendrickson Talks Chloe’s Comeback—How Long Will She Stick Around? https://t.co/haLWyTJmQN pic.twitter.com/hNeGxwjrte

At Society, Y&R’s Abby Newman, Lola Rosales, Elena Dawson (Brytni Sarpy) Ana Hamilton (Loren Lott), Mariah Copeland (Camryn Grimes), and Tessa Porter (Cait Fairbanks) gather for the bridal shower. Abby has shirtless waiters for the evening and the girls toast to Lola. Suddenly, Summer Newman arrives. Mariah and Tessa confront her about crashing, but Lola owes her life to Summer and asks her to stay. Abby takes Summer aside to warn her. She promises not to make trouble.

The party continues and Summer tells Lola she likes the new waiters. Lola asks about her mom. Summer says she’s home and thanks her for listening to the other day. Abby claps – it’s time for the presents, which have a wedding night theme. Summer watches her open the sexy gifts, then announces she has something to say. She admits this hasn’t been easy, but she wants to co-exist with Lola and put the past behind them. Lola would like that. Summer really does wish them well. She leaves, and Abby has another surprise for Lola.

Her mother, Celeste, (Eva LaRue), enters and she and Lola embrace. Celeste makes snarky remarks about the lingerie, but Lola says it’s all in fun. Her mom is thrilled to be there for her baby getting married.

Traci Abbott is thinking about Velma and Flynn’s kiss when Cane Ashby (Daniel Goddard) appears at Crimson Lights. Traci thinks it’s downright poetic she ran into him and reveals she finished her book. Cane wants to celebrate and asks, “What would your characters do?”

At the Abbott mansion, Y&R’s Cane Ashby and Traci Abbott toast to the novel with wine. Traci talks about writing a book being an emotional rollercoaster. The true unadulterated joy comes after typing ‘the end’ when it’s all yours and no one has read it yet. Cane says, “That’s beautiful,” then asks for a sneak peek. She starts reading it to him. In the end, Cane observes, “She saved him.” Traci says they saved each other. Cane’s in awe of Traci’s talent. Her story’s incredible; she’s incredible. Cane leans in and kisses her.