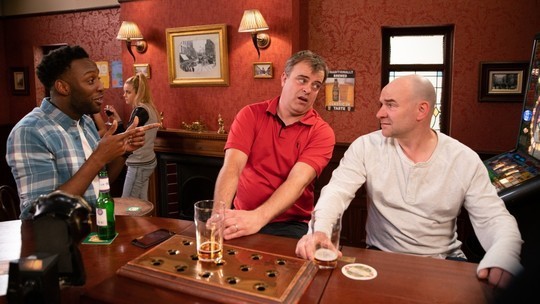 Coronation Street spoilers indicate that Steve McDonald (Simon Gregson) is about to come up with a new business plan after Tracy Barlow (Kate Ford) will surprise him with a sweet birthday treat. Apparently, Steve has just gotten all of the inspiration that he needs. Here’s what you need to know.

For Steve, things didn’t start off very well on his birthday. He was rather disappointed after he got a male grooming kit that he received from his mother and his daughter Amy Barlow (Elle Mulvaney). He was definitely let down, to say the least.

If that weren’t enough, his wife Tracy didn’t even put the effort in to get him a birthday card making him feel even more miserable on his very special day. To complicate things even more for him, he was surprised to hear that even his best mate Tim Metcalfe (Joe Duttine) turned him down for drinks at the pub.

Later that day Steve will complain about the way that things are going in his life right now. Yet, Michael Bailey will point out to them that they are possibly missing out on some really great business ideas in their life right now. Michael says that if they get together and buy a carriage, they can hook it up to their horse Tiny and charge for rides around the cobblers. Michael thinks that they can actually make a pretty penny this way, which has Steve pretty excited.

Later on, Steve gets home just to see that his wife Tracy did surprise him with a birthday tea. When he opens up his unicorn birthday card, he comes up with yet another idea. He doesn’t waste any time to pop over to the local store to buy some cardboard, glue, and glitter and gets to work. Steve now finally believes that there’s some hope for him after all.

However, things are going to end at a full stop for him when he finds out that his ex Fiona Middleton (Angela Griffin) is about to return to Weatherfield. He hasn’t seen her in nearly 20 years. His reaction to seeing Fiona is something that you simply don’t want to miss!