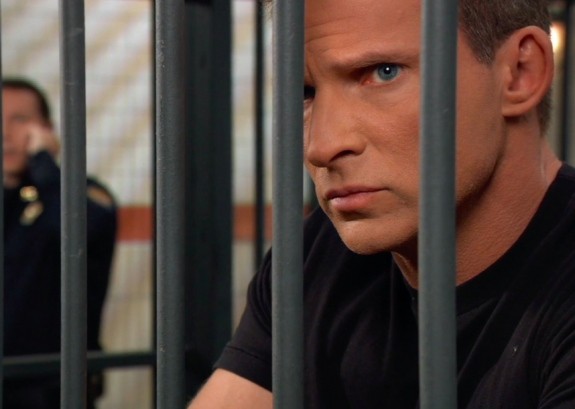 General Hospital (GH) recap for Thursday, June 27, 2019 reveals Shiloh Archer (Coby Ryan McLaughlin) approaches Sam McCall (Kelly Monaco) in the park, and then Sam gets a 911 text from Michael as Shiloh gets a call from the Beecher’s Corner cop.

Shiloh gives him instructions on what to do with Jason Morgan (Steve Burton). Shiloh says Sam still bears his mark; Sam says tattoos can be removed. Shiloh tells Sam that Willow Tait (Katelyn MacMullen) is in jail for contempt of court, but he will welcome her back when she comes to her senses just like he will Sam. Shiloh tells Sam about his run-in with Alexis and how he has the pledge in his head.

Shiloh says he and Sam shared something she could never have with Jason. Lucas Jones (Ryan Carnes) rushes in and tells Shiloh to stay away from his sister as well as his husband and son. Lucas demands Shiloh leave Sam alone; Sam pulls Lucas away saying Shiloh can’t hurt them anymore. Sam stops Lucas and tries to calm him down. Sam is afraid Lucas will tip off Shiloh. Sam promises Lucas that Shiloh’s past is catching up with him. Sam has to rush off to Beecher’s Corner.

General Hospital’s Beecher’s Corner cop starts to take Jason out of his cell and claim he tried to escape. Michael Corinthos (Chad Duell) is brought in as drunk and disorderly. Michael is thrown in the cell with Jason. Michael demands to know why he is in the cell. Michael claims he doesn’t have to give his identity. Jason demands to know what Michael is doing. Michael says he is saving Jason.

Jason says by getting thrown in jail, Michael learned from the best. Michael tells Jason how Carol Lockhart (Mandy Musgrave) came back to the diner and told him what happened. Jason thinks the cop is Shiloh’s enforcer. Jason needs a paperclip to get them out, Michael hands him one. Jason thinks Michael is too invested in his because of Jonah. Michael thinks about his son a lot but knows he is dead. Michael thinks his son would be alive if he had made different choices.

Michael has to do everything in his power to save Wiley from Shiloh. Jason gets the door open, and they dummy lock it. The cops come back, and Jason knocks out one and holds a gun on the other one. Jason wants to find a way out of this, so no one else gets hurt. Jason forces the cop to drop his gun and locks the two cops in a cell ordering Michael to leave. Jason tells the second cop to find a better place to work. Michael gets into the car with Sam, Jason joins shortly after and they leave Beecher’s Corner promising to give Sam the details on Carol as they drive.

General Hospital’s Julian Jerome (William DeVry) tells Alexis that Wiley Cooper-Jones (Theo and Erik Olson) isn’t Shiloh’s son. Alexis wants to know what Julian means; he doesn’t want to elaborate. Julian wants to know what the chances are of Lucas and Brad Cooper (Parry Shen). Alexis says the court has already subpoenaed the records and asks what they will find. Alexis asks what the court will find when the records are unsealed. Julian tells Alexis they will find the names of two people that don’t exist.

Alexis explains that Julian has made Lucas and Brad complicit. Julian tells Alexis we didn’t leave anything to be found. Alexis wants to know who we are. Alexis figures out that Sam helped get rid of the adoption records. Drew Cain (Billy Miller) goes to Charlie’s and speaks to Julian about Kim Nero (Tamara Braun). Drew thinks Julian should help Kim and not let her deal the way she wants. Drew tells Julian to encourage Kim to get some help, Julian promises to take care of Kim.

Epiphany followed the guidelines, but it didn’t work. Epiphany says Bobbie has to accept and accommodate her diabetes. Epiphany was mad at herself for worrying Milo Giambetti (Drew Cheetwood). Bobbie thanks Epiphany for her help and promises to ask if she has questions.

Sam's not the only one eager to tell Shiloh off, West Coast. But once they start, how easy will it be to stop?
Tune into a dramatic, new #GH – STARTING NOW on ABC! @kellymonaco1 pic.twitter.com/cjkkI9ZoAf

General Hospital’s Drew Cain (Billy Miller) tells Kim Nero (Tamara Braun) they cannot make a baby. Kim thought she, Drew and Oscar Nero (Garren Stitt) were a packaged deal. Drew says they were Oscar’s parents but can’t recreate that. Kim realizes Drew doesn’t want to be with her, but they can make a baby and then go their separate ways. Kim thought having a baby with Drew would mean they were together.

Kim wants Drew to donate sperm so she can be artificially inseminated. Kim says Drew can be as involved as he wants. Drew can’t put another kid through what Oscar went through. Kim says he doesn’t have to; they can make Oscar’s little brother or sister. Drew does not want to put that kind of pressure on a kid. Kim tells Drew she doesn’t have to keep hurting and Drew wants to, Kim will find another way to have a child.

Drew wants to talk. Kim tells him to leave. Kim sinks to the floor and cries. Kim imagines she hears a baby crying and looks through her apartment for it. Kim sees Oscar, and his voice turns into a cry. Kim calls someone and invites them to her apartment. Shiloh shows up at Kim’s, and she thanks him; he is always there for those in need. Kim apologizes for calling Shiloh.

Shiloh tells Kim how Oscar told him about how strong and loyal Kim is. Kim tells Shiloh she has seen Oscar. Kim wants Oscar back for real, and no one will help her. Kim asks Shiloh to help her bring Oscar back. Oscar promises to help Kim any way he can.