The Bold and the Beautiful Spoilers: Friday, June 28 – Thomas Panics At Hope’s Beth Blunder – Wyatt Asks Flo To Move In 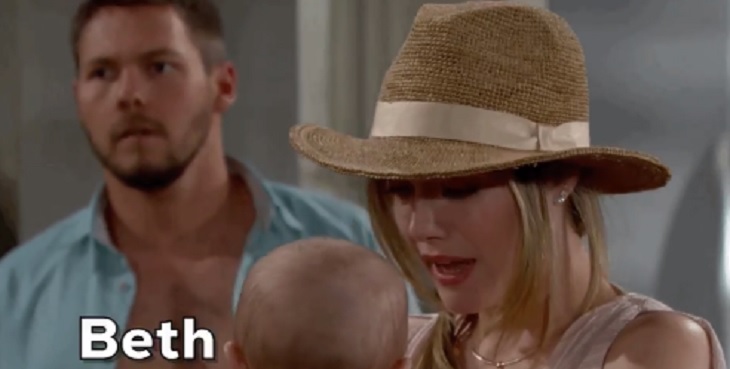 The Bold and the Beautiful spoilers for Friday, June 28, tease that Hope Logan (Annika Noelle) will have a meltdown. As B&B viewers know, she’s just called Phoebe Forrester (River Davidson and Madeline Valdez) by Beth Spencer’s name, and she’s on the verge of breaking down. Steffy Forrester (Jacqueline MacInnes Wood) and Liam Spencer (Scott Clifton) are very concerned about Hope’s well-being and state of mind.

The Bold and the Beautiful spoilers say that Thomas will have some tense moments, but it looks like Hope will come back to reality soon enough and realize her mistake. She’ll likely be shaken, and you can bet that Thomas will be right there to comfort her. Since ongoing B&B spoilers indicate that the Beth secret will be kept for a while longer, it looks like Thomas is safe for now.

And that will be fortuitous for Thomas, as he has a devious plot to carry out. As B&B viewers know, Thomas scored some drugs from his buddy, and B&B spoilers indicate that he intends to slip those drugs to Liam to “help” Liam and Steffy get closer.

Meanwhile, on Friday’s new episode of B&B, Wyatt Spencer (Darin Brooks) will be feeling pensive. As B&B viewers know, Emma Barber (Nia Sioux) recently passed away, and Wyatt may start thinking about how life is precious and fleeting. He’ll feel like he needs to get on with living life.

Wyatt just got some closure with Sally Spectra (Courtney Hope), it seems that he’ll be anxious to move forward with his relationship with Florence “Flo” Fulton (Katrina Bowden). The Bold and the Beautiful spoilers say that he and Flo will soon start living together, so it looks he’ll ask Flo to move in with him.

This means that Flo will have to move out of the luxurious Forrester Mansion, but that probably won’t bother Flo at all. She truly loves Wyatt, and she’ll be thrilled to take their relationship to the next level. The only downside for Flo is that she’s harboring some explosive secrets from Wyatt.

Flo knows that Wyatt doesn’t like secrets and would probably dump her instantly if he knew about her involvement in Reese Buckingham’s (Wayne Brady) baby switch and adoption scam. Although she’ll be thrilled to move in with Wyatt, her guilty feelings will probably go off the charts.

Be sure to tune in on Friday to catch up on everything happening on B&B right now.