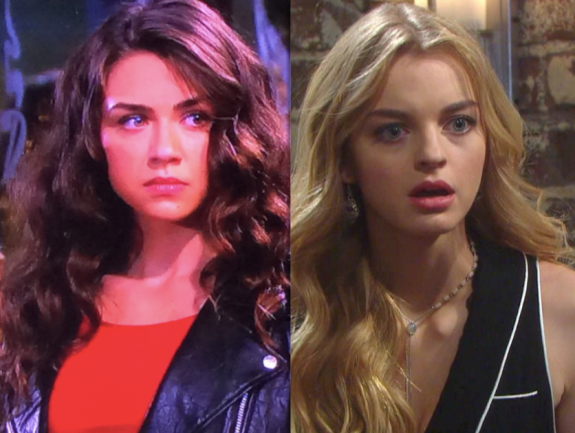 Marlena asks if Ben is out on bail, he says thanks to Justin Kiriakis (Wally Kurth). Ben tells Marlena he is worried about Ciara. Marlena tells Ben their doctor-patient confidentiality is still intact and wants to talk over chowder. Ben tells Marlena that Ciara is putting herself in danger with the person who set the fires to prove his innocence. Marlena asks if that means Ben knows who set the fires, he says yes. Ben doesn’t want to hurt Marlena by telling her the truth, but Claire Brady (Olivia Rose Keegan) started those fires.

Days Of Our Lives Spoilers: Haley Chen Is Home To Stay

Days of Our Lives J.J. thinks he and Haley Chen (Thia Megia) need to run away; she tells him she didn’t return for that. Haley tells J.J. she is here to stay a senator friend of Melinda Trask (Laura Kai Chen) stop the deportation, but she still has to fight for her green card.

Days Of Our Lives Spoilers: Hope Terrifies Kristen, Getting Too Close For Comfort

Haley tells J.J. she feels like she is home. J.J. says she can cook again soon. J.J. and Haley both agree that they couldn’t forget the other one. J.J. tells Haley they are in this together. J.J. tells Haley he loves her in Chinese. Haley tells J.J. she had to tell him how she felt, J.J. wanted to tell her he loved her before that. J.J. and Haley begin to kiss. J.J. assures Haley he can wait, this is what she wants.

Days of Our Lives Claire sees Tripp Dalton (Lucas Adams) and Ciara on the couch in their underwear and goes ballistic on them both. Claire tells Ciara that she stole everything from her. Ciara tells Claire that’s a lie; she stole Theo Carver (Kyler Pettis), the Face Of Bella Contest, and Tripp from her. Ciara tells Claire she’s too damn needy to see that this is her fault.

Claire sees the lighter lying there and demands to know why it’s there. Claire says the lighter looks like the one Ben used to start those fires. Claire tells Tripp all she ever did was love him. Claire almost confesses to starting the fires until she gets a text from Eve Deveraux (Kassie DePaiva). Claire changes course and claims she doesn’t remember what she started to say.

Claire says she is going to pack her stuff and go. Ciara tries to keep Claire talking. Claire takes a knife from the butcher’s block. Tripp speaks to Claire, who turns and pulls hold a knife to his throat. Tripp and Ciara try to talk Claire down. Ciara tells Claire she hates her not Tripp and tell her to let Tripp go.

Days Of Our Lives Spoilers: Kate Roberts Is Onto Something

Days of Our Lives Kate Roberts (Lauren Koslow) wakes up in the tunnels with Ted Laurant (Gilles Marini) and tell him where they are. Ted asks if there is a way out, Kate tells him they are trapped. Ted tells Kate about the autopsy report and how Nicole knocked him out when he told her.

Days of Our Lives Kristen calls Xander to make sure he killed Kate Roberts (Lauren Koslow), Sarah Horton (Linsey Godfrey) overhears him confirm it. Xander claims to be talking about news stories. Xander asks Sarah if she came to her senses and dumped Rex Brady (Kyle Lowder). Xander fixes Sarah and himself a snack with champagne. Xander makes a toast and pushes Sarah to open his wedding gift.

Sarah tries to turn down the wedding gift but opens it anyway. Sarah is stunned when she sees the necklace. Xander insists that Sarah keep the necklace and asks her to try it on for him. Xander tells Sarah she outshines the necklace. Rex messages and asks Sarah to meet him at Doug’s Place. Sarah thanks Xander for the necklace before leaving.

Days Of Our Lives Spoilers: Hope Gets an Odd Text

Days of Our Lives Hope Brady (Kristian Alfonso) approaches Nicole and asks how she is feeling. Hope knows Nicole missed her first day of work. Hope asks more questions about Ted, Nicole claims to know nothing and walks off. Kristen says Hope has to go, and she needs to do it herself.

Nicole types up a text from Ted breaking off with Hope. Hope texts back and says goodbye, Ted. Hope starts to leave Doug’s Place and sees Sarah necklace asking where she got it.