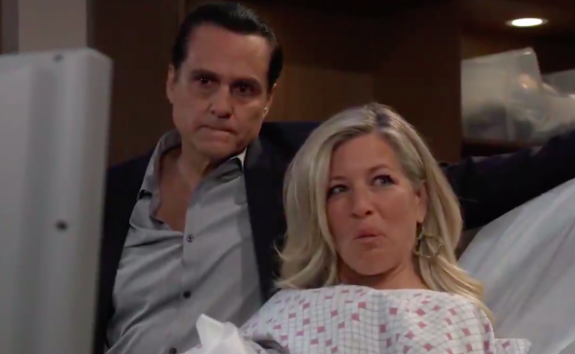 Nina tells Jax that Drew is busy and she should be addressing her concerns to him not Drew. Drew tells Nina she works for Jax and needs to address him from now on with any issues. Nina tells Jax she wants more freedom. Curtis arrives, and Nina wants to know why she didn’t tell him about the job.

Curtis wanted to be hired on his merits, not friends recommendations. Jax and Nina leave Curtis and Drew to their business. Jax comes back in and joins Drew and Curtis asking what he missed. Drew has signed his papers; they are waiting on Jax.

General Hospital’s Curtis Ashford (Donnell Turner) meets with Valentin Cassidine (James Patrick Stuart) at the Metrocourt. Curtis says his background check cleared and he is taking the job at Aurora. Sasha Gilmore (Sofia Mattsson) walks in and is on the phone with Michael Corinthos (Chad Duell) asking about their date. Curtis heads to Aurora to fill out some paperwork. Valentin joins Sasha, and she tells him she is staying in Port Charles. Valentin tells Sasha she needs to leave after the wedding like they agreed.

Valentin explains that the longer she stays, the more likely she is to be exposed. Valentin warns Sasha that Michael’s family will investigate her. Sasha promises she and Michael are not serious. Valentin speaks from experience lying to the one you love is a lonely life and advises her to get out now. Michael arrives right after Valentin leave the table. Michael apologizes for going off the grid; things can get crazy sometimes. Nina arrives and tells Valentin how perfect Michael and Sasha are together.

General Hospital’s Carly Corinthos (Laura Wright) and Sonny Corinthos (Maurice Benard) are waiting at the hospital for her doctor’s appointment. Michael Corinthos (Chad Duell) arrives and updates them on the Beecher’s Corner happenings. Michael tells them Carol Lockhart (Mandy Musgrave) confirmed that Shiloh is a murderer.

Michael gets Sasha’s text and leaves for dinner. Sonny and Carly are joined by the doctor for her ultrasound. The doctor does the ultrasound and says she needs to consult with a colleague before she can tell them if the baby is ok. The doctor comes back and tells Carly and Sonny it seems like the baby’s bones in the spine haven’t fused and she spotted a pocket of fluid on the spine.

The doctor says they won’t know the severity until closer to birth. Carly and Sonny are told the extent of the possibilities of complications the baby could have. The baby has to be delivered by C-section, but Carly isn’t at any more risk. Carly asks if she caused this, the doctor assures her she didn’t. Sonny asks Carly if she is alright. Carly says the baby will have a difficult life; Sonny says the baby will have their love, that’s all that matters.

General Hospital’s Kim wants to bring Oscar back and wants Shiloh Archer’s (Coby Ryan McLaughlin) to help her. Shiloh wants Kim to confirm that she wants him to father her child. Kim tells Shiloh he misunderstood. Kim wants a baby with Drew but needs Shiloh’s guidance. Kim wants Shiloh to teach her how to get through to Drew about the baby. Kim explains that Drew doesn’t remember loving her. Kim says she asked Julian Jerome (William DeVry) to have a baby before she realized Drew has to be the father. Kim tells Shiloh that Julian has some custody issue going on with his son.

Kim tells Shiloh it is really about Julian’s grandson. Shiloh wants more details; Kim doesn’t know the details. Kim tells Shiloh they are afraid the baby’s father will come after him. Julian arrives as Shiloh is leaving Kim’s. Julian demands to know why Shiloh was there. Julian tells Kim that there is a lot she doesn’t know about Shiloh. Julian tells Kim everything he knows about Shiloh. Julian tells Kim he and Drew are worried about her. Julian was hurt by Kim approaching Drew for a child. Julian wants her to be better, and she needs to get help.

General Hospital’s Harrison Chase (Josh Swickard) brings Willow Tait (Katelyn MacMullen) tea and encourages her to cooperate with the court. Willow tells Chase she cannot cooperate without saying Wiley Cooper-Jones (Theo and Erik Olson) is her son. Willow says she will protect her son until death. Michael arrives and asks Willow how much she told Chase about her father.

We're proud to celebrate #PrideMonth with @RyanCarnes1. All are welcome in Port Charles. #GH pic.twitter.com/OUkuNyyLRS

General Hospital’s Brad Cooper (Parry Shen) meets Lucas Jones (Ryan Carnes) at the hospital. Lucas believing cooperating is the right thing to do, Brad wants to run. Lucas explains that if they run the case will go on, and they will become fugitives. Willow says they will have to stay away from family and if caught, they will lose Wiley for good.

Lucas tells Brad they will have to change their identities if they leave town and Wiley can never know who he is. Lucas believes they should be honest; it is their best chance to keep Wiley. Brad rushes to Charlie’s to speak to Julian, and Shiloh approaches him there. Shiloh tries to calm Brad down, but he orders Shiloh to stay away from him and leaves. Shiloh recalls a conversation with Brad about the baby and realizes Wiley is his son.